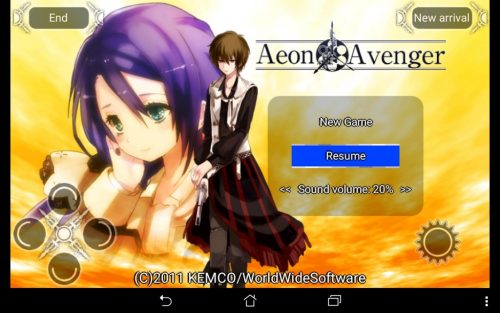 There are 3 reviews for 'Aeon Avenger'.

The good, the bad and the ugly but mostly ugly

The bad out weighs the good. If you have the free time knock it out. It’s very complex in some areas for this short of a game. I still don’t know how to do everything well…
Like everyone else there is at least 2 if not 3 different translators making everything sketchy. Weapons are confusing and characters deal 0 damage in a couple areas with different weapons based on their specialty. Some bits have little use or absolutely no use in the game. Full auto the battles is the only stress free way. The ending seems rushed or incomplete.

Interface and Controls Rules Them All

Well, this is a story about avenging the family death by going through the game to the cliché of slaying the evil whatever. Personally, I think the most effective way to do so is NOT purchasing/downloading/playing the game. And as a bonus, if you never play it, technically the family never dies. It’s a Win-Win situation!
Well, joke time is over. Let’s try to make a serious review, even if not completly neutral.

======== First Impression
Never liked the game premise, but it was $0.99 on the store and was from WWS, so I thought on purchasing it.

======== Comments After Playing
I tried it once, hated, wrote a hate post (not a review) after about the major event of the family dying, then uninstalled it. A year or two later, I download the game again, play again (following the walkthrough this time), finished the Past, went to Future, escaped, and decided the game was not worth finishing.

So, for starters, there’s no quest log or whatever. Weren’t for location walkthrough, I would have no idea of what I was doing if I had to put down the game. And honestly, every time I put down this game, I don’t fell a wish to take it up again.

The worst is the GUI from the game. Actually, I hate the GUI. Saving is hard. Equipping stuff is hard.
The features also have downsides:
There’s a minimap: Good! It vanishes when you walk: Not Good!
The combat system is different from the usual: Good! I often (=always) have no idea of enemy HP: Not Good!
There are item/enemies guides: Good! These guides show no info besides name and picture: Not Good!
The skills are given by a “bits” system, where you equip a sort of skill gemstone to the weapon (like accessories). Stronger weapons have more slots. You can add/remove bits freely. Stronger weapons takes more slots. Seems nice, right? Well, it seems so, but equipping the bits is hard (because the GUI is in overall bad), and you can only find out the good skills by trial and error (how much mana I need? Some texts are confusing, too.)
Worldmaps are neatly done, and walking back/forth between “levels” is just selecting them. Nice. Could be better.
…And so go on…

Story is weak. I think the characters were nice and all, but I can’t remember. My memory is remarkable, everyone on status window, by glancing at portrait, I have a faint idea of whom they are supposed to be. I also remember faintly some other char because the weapons. Other than that: I can’t ever remember the enemy I should be trying to kill!

Controls? Now, first thing to remember on my reviews: I always use the D-PAD. Except for Legend Of Ixtona. The controls are hard to use, they vanish when you don’t use them for a really really short while (about 7 seconds – they are barely normally visible).

About healing spots, my first concern because they vanish when you use them, until you leave and enter the area again (It means grinding is not so smooth on this one) – That problem is simply pale in the great scheme of things.

The ending might be good. Maybe? I decided it was not worth the trouble. Maybe if I had more patience and free time. Six hours and half in, and I’m leaving.

======== Rating Summary
Let’s see, what on this game actually isn’t worth 1 (or 0) stars?
Well, the time walk concept is interesting. There’s a minigame of the sorts, of leaving stuff in past and taking them back on present. The game is somewhat playable (hey, I did six hours, after all).

Story is unmemorable. I still faintly remember some parts on the middle which were really good, most of stuff to do had a really good ingame justificative: That could be five stars, outstanding, EXCEPT, main plot was really, really weak. Maybe that was intended. Maybe I’m suffering from halo effect and letting my bad experience reflect here. Story is WAY better than gameplay, I did not gave it a full go, the plot is solid and everything, but without any way to know ingame what I was doing or whom everyone on my party was, I simply refuse to give it the fifth star.

Battle system suffers because the UI and lack of enemy info. There was nothing exceptional (I’m not giving an extra star because battle logs or higher-resolution art, and I can barely remember the difficulty to count). 4 stars, minus one because that, total: 3 stars.

Skill System, well. Like on battle system. It’s not difficult to use in-game, but adding them is a pain. Need trial and error. Well. 4 stars, minus one because that, total: 3 stars.

======== Monetary Worth
Wouldn’t grab not even a fully free (not freemium) version of this game.
I’m sure lots of work were poured into making the game, and story is not that bad.
But why should I care about story if I have difficulty playing in first place? This is not a book. This is a game. Gameplay comes first and foremost, and it is built upon controls and interfaces.
The very basis are bad. I’m sure if they only refitted the game to use the same interface/control of any other game of theirs, the game would fit the “wasted potential” group ($0.99 worthy) games.
But as is? Sorry, I have better things to do with my money. There’s a huge queue of games to buy and play before getting on this one.

The game is pretty basic, with cheesy music and okay graphics. One thing that’s either really cool or really frustrating – depending on your play style – is that in this game, every party member can use any weapon and any skill. (The catch is that certain skills only work with certain weapons.) I liked the concept but in practice, I found that it was too difficult to choose from all the different skills available. Otherwise it’s a decent game with a nice surprise ending.