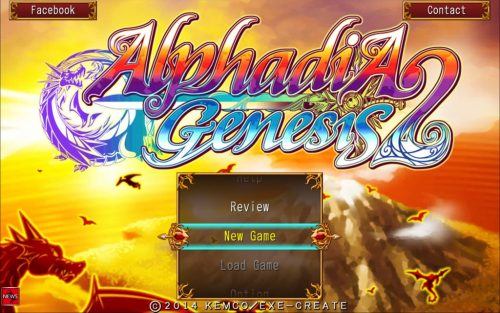 There are 2 reviews for 'Alphadia Genesis 2'.

A step-back from the 1st game in some ways, a step forward in others

Gameplay:
AG2 is much faster-paced than the first one when it comes to gameplay, it introduces Treasure Searcher items which make hunting for missed treasure chests in dungeons MUCH EASIER than in AG1. Enemy encounter rates are also adjustable right out the gate from the beginning of the game from the options menu w/o need for any special accessories or IAP stuff, unlike AG1. In addition you can now warp to towns from the menu w/o need of certain items, and dungeons now have warp points that you can use to warp between sections of a dungeon.
Controls: I played this on PS4 w/a controller so this is a no-brainer [On mobile, YMMV]
Story: Oh boy, the story here had potential, but was disappointing. It effectively puts the genocidal villains up on a pedestal and makes them look justifiable and like “the good guys,” which another RPG Insanity reviewer had issues with like myself.
Battle System: AG2 introduces a boost charge system where your characters can do powerful attacks up to a boost rate of 5. You can refill boosts w/Command Charge items, certain Special Skills [Special Skills will eat up your Boost Slots when you use them, you regain them either through defending or going to an inn], or defending. However Boosting is really the only way to fight many enemies in the game for high Battle Ranks and quick battle clears, unfortunately, and some bosses have skills which drain your boosts which is a real PITA.
Skill System: In AG1 you only had Fire/Water/Light/Hybrid Energi and character-specific “Break Skills,” all of which consumed EP, now you have 5 different Energi jobs. 4 of those you equip on your characters with Orbs, once the Orb Jobs are mastered to Lv. 99, the 5th job class unlocks which contains the most powerful skills in the game. You cannot use the 5th job’s skills w/any other Job at once on your characters, however. Character-specific Break Skills were replaced with Special Skills that take up a certain number of your Boost Slots when you use them, these are earned through main story events and the Postgame/True End Route.

The story lionizes genocidal villains AND keeps the heroes from making any hard choices.

This review is for the Nintendo Switch version of AG2. Like other console versions of AG2, the Switch version replaces a “cash shop” of in-app purchases with a “points shop”, where the player can spend “points” earned in-game by winning battles with an A rank or better. Console versions offer paid DLC to power up the party; all paid DLC is completely unnecessary.

Alphadia Genesis 2 is the follow-up game to Alphadia Genesis. The two games can be played in either order, since the playable characters and the main stories of each game are completely different. However, the stories are connected in one important regard: a mysterious plot thread left dangling in the True End of AG is revealed and followed up in the True End of AG2.

The battle system of AG2 has been majorly overhauled from the battle system of AG. A few of the changes are improvements, such as a new system that shows the player exactly how many battle turns will pass before a buff, debuff, or bad status effect will wear off on a party member or an enemy. AG2 also gives the player complete control over the encounter rate from the in-game menu; the player can set the encounter rate to None, One-Half, Normal, Double, or Every Step.

Other battle system changes don’t do much to improve the game. There are only four playable characters instead of six, and the battle formation system has been drastically simplified. Formation bonuses only last for a few turns in battle, making them relatively unimportant for boss fights. Except for the postgame-intended Hero class (if the player grinds metal slimes to earn the Hero class before the postgame, then the main game becomes trivial), learning AND using class-related abilities requires equipping class-related accessories…

…but these accessories are in short supply. The player can’t get more than two or three of certain class accessories (unless more are hidden in impossible-to-see secret passages – seriously, I could not spot ANY secret passages after the first, and there’s no in-game item to reveal them). The limited accessory supply restricts the player’s freedom to experiment with different classes. The incentive to learn AND have access to class abilities means that all non-class accessories are close to useless (except in the postgame); 99% of the time the player is better off equipping two class accessories to each character instead.

AG2’s big centerpiece battle feature is its “boost” system. Attacks, healing abilities, and buff/debuff durations can be powered up by spending up to five “boost” slots to strengthen them. Slots regenerate at the natural rate of one per turn; defending regenerates two slots; and one character’s special ability or a rare consumable item will restore all slots. Each character has one or more special abilities that will “break” slots when used, and broken slots repair at the rate of one per turn; the repair rate of broken slots can’t be sped up at all.

Overall, the battle system’s pros and cons don’t change its fundamental core as standard, turn-based JRPG comfort food. The optional boss fights, including Arena matches that are very tough at the recommended levels and a “secret” postgame optional boss that can be refought as much as desired, offer a worthy challenge. There are also plenty of sidequests, as is typical for an Exe-Create game.

The real problem I have with AG2 is how badly its story handles the deadly serious issue of human genocide.

Atramians look, act, and live their lives in the same way as Lucerians. Sometimes the black energi turns Atramians into mindless, deadly monsters, and there is no known way to prevent or reverse this, but actual instances of it happening are extremely rare.

The main driver of AG2’s plot is that the Lucerian empire, led by the Emperor, his son, and his top-ranking military generals, are pursuing a genocidal war with the goal of exterminating every last Atramian. No exceptions. The Empire’s army slaughters entire villages of Atramians – men, women, and children.

The four playable heroes consist of two Atramians, who are desperately trying to unite Atramian villages to fight back, and two Lucerians, who are so appalled by the Lucerian empire’s genocide that they put their lives on the line to stop it. This setup for a war story has potential… and that potential is recklessly, horrendously squandered.

Unlike AG, AG2 does not derail its serious story with terrible romance plots. One of the playable party members is an older woman who frequently makes lewd advances on young men (even during war councils!) but this is played for comedy relief. Although her unwanted advances are weird and creepy (she talks about being “tied up” in one particularly lewd joke), she never escalates her advances to unwanted touching or worse.

AG2’s story has two fatal flaws. The first and most disturbing flaw is that the story heavily lionizes the architects of genocide. The emperor’s son is presented as honorable, even though he leads the massacre of an entire Atramian village. The emperor’s generals are presented far too sympathetically given the horrible atrocities they are directly responsible for. The story can be interpreted as defending and justifying genocidal murderers, especially the emperor’s son. It really leaves a sick taste in the mouth.

The second, more subtle, but still fatal flaw is that the story twists itself into knots to keep the heroes from having to make any hard choices. The heroes find and defeat an enemy scout; then the scout commits suicide, sparing the heroes from having to execute him (or turn him over to the authorities to be executed). The heroes cull monsters, but can’t bring themselves to break a monster’s egg – so someone else does it.

As the war progresses, the heroes confront the possible extermination of all Atramians – until a deadly poison used as a weapon against Lucerians gives the opportunity to gain the upper hand. But the heroes never have to make the hard choice between being slaughtered or using the poison; someone else uses the poison. The poison also sickens Atramians, and when the heroes quest for an antidote in short supply, they never have to make a hard choice between saving Atramians or saving Lucerians – the story just twists itself around so that the short supply isn’t so short after all.

It’s just so hopelessly contrived, as if some cosmic Author is determined to shield the heroes from making any difficult decisions. AG2’s story ultimately feels a hundred times worse than AG’s mess of a story.

I should note that AG2’s English localization is excellent. I know just enough Japanese to recognize that the translator was very careful to accurately convey the full meaning behind the original (voice-acted) story scenes. A good translation just can’t fix a bad story.

If you want some JRPG battle system comfort food with a decent challenge, AG2 is good for that. But if you want an Exe-Create JRPG with a good war story, then Unlucky Hero/Unlucky Mage is vastly superior.

A game with an even better war story – one that does not lionize architects of genocide, and does not shy from having the playable characters make hard choices – is the Square Enix tactical RPG Tactics Ogre. At the time of this writing, the latest remake of Tactics Ogre is titled Tactics Ogre Reborn and has a November 2022 release date.