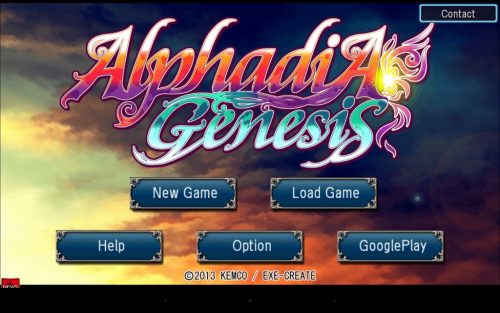 There are 2 reviews for 'Alphadia Genesis'.

The 3D battle graphics look good. The optional bosses are fun. The story and characters are squandered potential.

Alphadia Genesis is the first of two prequel games to the Alphadia RPG series (the second is the logically-named Alphadia Genesis 2). The battle graphics feature three-dimensional models for characters; these are decently animated, and may evoke memories of Playstation 2 games.

This review is for the Wii U version of Alphadia Genesis, which presumably has the same tweaks as other console ports. There is no paid DLC and no cash shop; instead, the player can acquire a special “AGP” currency by spotting faint sparkles or fighting optional bosses. AGP can purchase some uniquely powerful items.

No optional dungeons or bosses are gated behind AGP. This is good because AGP appears to be strictly limited in quantity, and is shared across all save files. If the player spends AGP on any save file (including spending AGP to continue a fight that was lost), then that AGP is permanently gone from all save files.

Alphadia Genesis adheres very closely to the standard formula of game developer Exe-Create. There are almost no unique aspects, or even customization, beyond a few choices in equipment and the decision of which party member should learn what type of elemental magic.

There are six playable party members, who can be arranged in different formations to confer various benefits, but these benefits are so minimal that the player may as well pick four favorites and use them exclusively. The party formation can’t be changed in battle, meaning that the two reserve party members can’t directly participate in combat. If the player’s chosen team of four gets KO’d, it’s game over. The reserve party members can participate indirectly in combination attacks when a certain meter fills up, but these combination attacks are very rarely worth sacrificing a party member’s turn to use.

Even though the basic game formula is bog-standard, seen-it-a-million-times for JRPG fans in general and Kemco/Exe-Create fans in particular, Alphadia Genesis keeps things interesting with a variety of optional boss fights. There are two difficulties, Easy and Normal. On Normal, the optional Arena battles are quite challenging at the recommended minimum level. There are sidequest-related optional bosses, a few optional world bosses that can be defeated for a special in-game currency, and randomly appearing “Giga” versions of regular enemies are effectively bonus optional bosses.

The overall package of the combat system is feels polished and balanced. It also feels unoriginal and limited. Compounding this is the lack of certain player-friendly features in other Exe-Create games. There’s no auto-win option for encounters with weak enemies; the consumable item to turn off encounters with weak enemies can only be bought with a currency better spent on other things; and dungeons don’t have any warp points at all. One saving grace is that running away from random encounters has a 100% success rate.

The most glaring weakness of Alphadia Genesis is its story and characters. The story attempts to explore some interesting ideas about a society where magically-created “clones”, used both as household servants and weapons of war, have the potential for human feelings. As the world recovers from a devastating “clone war”, a movement advancing the rights of clones has begun to spread; then a shocking murder allegedly committed by clones threatens to turn society’s opinion negative.

And then this fascinating plot about a tense situation between clones and humans, and tentative cooperation between kingdoms that warred fiercely against one another less than a generation ago, gets sidelined for a sappy, two-dimensional teen romance. The indulgent love story is not just cliche-ridden, it’s outright nauseating. The two lovebirds are beyond simple-minded, and the rival love interest gets such an emotional curb-stomping that even though he’s supposed to come across as a horrible, arrogant jerk, I felt genuinely sorry for him. Oh, and there’s a secondary romance B-plot that makes even less sense than the romance A-plot.

After the halfway point of the story, Alphadia Genesis remembers that there’s a main plot and gets a little more interesting, but most of the major characters remain so self-contradictory as to shatter suspension of disbelief. Even their character growth moments are hard to swallow, because their motivations were such a mess to begin with, but I suppose the game deserves credit for trying to develop the train wreck personalities of its heroes and villains.

Alphadia Genesis is difficult to recommend. If you enjoy Exe-Create’s bog-standard battle system, it’s fun for that. And even though its story is bad… once the horrendous romance plots of the first half stop being the central focus, the story does at least go somewhere, and do something. Some of the inconsistent characters do change and evolve to a degree, sort of.

Now a fair warning, this review might feel like a rant. Please proceed at your own discretion.

This is probably the first time I have written such a small review. Well to put it bluntly, I do not hold this game in high regards like most do. Yes, it was probably the first 3D battle centered Kemco game. I agree that the game mechanics were good, the bosses were challenging, the post game (all though little) was mediocre. But oh boy, the story is mediocre at best, the characters are a complete mess. Like literally (for me at least, others beg to differ). Lets take an example of Fray. This guy has some major writing issues to him. On being a goody toe shoes, he does a complete 180 in like middle of the game. To say this without spoiling, he lost someone, WHO was also there the whole time infront of him, having the same mind and body, but no this guy begs to differ. You see he can seemingly call an Android human but can’t call a human, human because its not the same person that was before but is still the same in every aspect? Yeah mind blowing. I won’t go into much detail about it here. I can spoil you guys in the forums, but review’s are a no-no.

Lets talk about the story. Its an evident mess of cliche’s packed into an even bigger cliche. I don’t know how someone can do that, but Exe-Create did. The story starts of nice. It had a dark feel to it. It’s build up was nice and tense, and then and there they decided to say, well lets dump this plot and make it a love centered story. Now others will strongly defend this, but in my defense I can say that the romance part of any story has to be sub-point. Not a major plot point. You do not center the whole story around two characters, it just breaks the whole flow of the plot. Not only that, but they decided to cover all of the teenage romance tropes they can find, so much that they forgot there is a bad guy in this guy, who just so happens to appear in the weirdest moments, leaving only a faint memory in the players mind, who also appears to get a 180 degree turn in his character with just a few talks and all (including love, yes). The game is THAT romance fixated.
I like my story with a romance that is only on the side lines and is not fixing to collide with the main plot. Alphadia Genesis 2 at least did this right in that regard.

There is no character option in reviews here, otherwise that would have been a straight 0. The only reason I give it a 2 in the story department because the concept and visualization was great, the developers just had a weird premonition to throw that out of the window and proceed with an over the top cliched story. Nice going there Kemco.