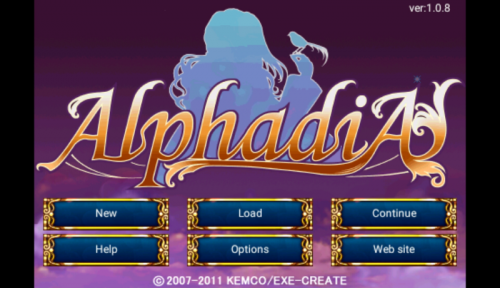 There are 5 reviews for 'Alphadia'.

Alphadia, the original holy grail of EXE-CREATE before of Asdivine.
One of EXE original long running series.

Alphadia is.. very interesting if you ask me.
Let’s say it’s match MAGITEC holy grail 「 Steel Illusion: Chrome Wolf」in the terms of story flow.
The more you progress, the sadder the story become as you uncover the revelations around the Empire and the puppeteer of shadow in it’s back.

The story follows Ash and Karim, the brothers guarding their town, as they encounter a woman and her knight chase by their fellow knights.
In this unexpected turn of event, they become a heroes in the mission to stop the growing political issue of destruction cause by the Empire and the puppeteer truly desire.

「 Energi..
The source of power..
Interconnected..
with all living things… 」

Everything is 5 star even there's a lot of holes.

The game has a lot of holes but it’s still good.
The story is very good, one of the reasons why i started to like Alphadia than Asdivine.
The plot revelation is what makes the game more interesting, that lead to the tragic end.

as far as the game itself, i have had a lot of fun with it. yes, the dungeons are hard to navigate, but you can turn on big map. the storyline is excellent…it is what kept me playing a game that had graphics from like the nineties, but it kept me entertained. If the battles are too easy, turn them up. there are so many facets of the game that i dont completely understand…at this point, i beat the main part of the game, but due to a glitch, i had to restart. I lost connection to the internet, not a game glitch. i have chosen to go “Master” or the highest difficulty on the second time through, and was powned a few times. im an hour into it as of now. but the banter between the main characters are great, particularly between raine and gil. there are a few things that i can tell you will make the game a heck of a lot easier… first, pay attention to the tutorials. second, dont be shy to utilize the shop. (for those who havent played the game, the shop is not for pay to win. you get items, ALP, that you can spend for different things) The Pillar L Is a huge bonus to cash. as well as being cheap when it comes to alp. finding the items to recruit the companions can be a bit…irritating, but have fun with the game. i did enough to try to get all the achievements. i would not suggest playing easy on the second time through…my second time through, i am going on the hardest level…but remember there are armors and items in the shop that make the game so much funner…personally, i like the hack and slash that an encounter every step is fun…but you dont want to do this in an area that is more powerful than yourself…once done with all the achievements…i will either post a new review, or edit and continue this one…HAVE FUN WITH THIS GAME, I SURE DID AND DO

Welcome to Alphadia, a game that can virtually play itself! On the surface, there are some positives here. I liked the story. While the characters were overly verbose and awkward with their lines (in other words, perhaps a too literal Japanese to English translation), there were some decent twists and I wasn’t expecting the way this one ended.
The dungeons could be described as a mixed bag. On one hand, they don’t hold your hand like so many Kemco games do. They’re not simplistic (many of the more modern E-C games have a lot of very linear dungeons; these are legit mazes), I don’t recall there being any sort of mini-map in these places to help me get my bearings and are loaded with traps such as fake floor tiles that send you down a level. But, man, they went a bit far at times, as with a few, it took an eternity to figure out how to navigate through them due to minor details such as doors simply disappearing when you find the switch that corresponds to them, leaving you to wander around aimlessly until you, by luck or perseverance, find the corridor they were blocking.
When you add in this game’s annoying combat frequency, this easily leads to your party becoming over-leveled, making this game a breeze. After doing a couple dungeons, I wound up being able to beat all but the final boss and the post-game content bosses simply by hitting the auto-battle button. Heck, I don’t even know if my “skill system” rating could be considered accurate — not like I had to use those things too often!
It’s not a “strongly don’t recommend” sort of game, as I liked the story and, if you’re playing a game like Alphadia Genesis 2, where you’re essentially having your hand held throughout each boring, linear dungeon, you might like the challenge of navigating these beasts — but I also don’t think I can recommend it either.

Everything about this game is cheesy...

…but still I love the story! The battles are way too easy, the dungeons are way too long, and the boss battles don’t need any strategy at all. Also the dialogue is… not translated very well. Yet in spite of all this, the story in Alphadia is one of my favorites, and it makes everything else okay. The skills system is okay; there’s nothing really good or bad to say about it. Die hard 2D RPG fans will probably love this game, but other players might be disappointed.