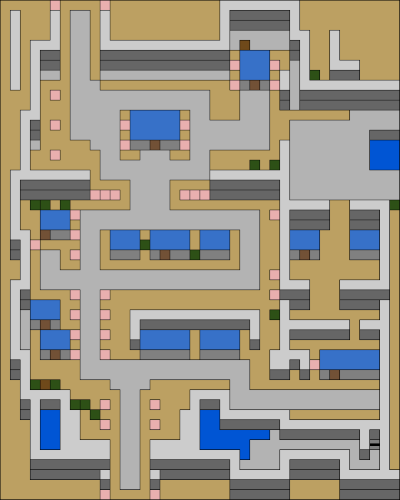 Map of the Town of Centaurius

When you arrive in Centaurius, there are soldiers guarding the town. Fortunately, they don't seem to notice you, so maybe the soldiers out here haven't heard about your group yet.

However, as you talk to the townspeople, you learn that people are being taken from Centaurius, and none of them have ever come back alive. To get to the bottom of things, talk to the group in the front of the Inn.

It seems the Schwarzschild Army has been taking people from Centaurius, and using them in their secret experiments. When Eclair learns about this, she vows to put an end to it. Shion agrees that they need to do everything they can to stop the Empire.

In the basement of the Item Shop, there's a Wealthy Woman who has a huge collection of flowers. She asks you whether you like flowers or not. Answer yes, and she agrees to let you pick one of her flowers. (However, you won't actually be able to pick a flower until you've received Quest 42, so for now just remember that she's here.)

In the south of town, there's an old man who will test your knowledge of Alphadia, and if you answer his questions correctly, will give you a reward.  To reach the old man, enter the building in the southeast corner of town and follow the underground passage.  When you come back out, go west and you'll run right into him.

For answers to all of his questions, see Quest 23.

The South of Town

As you're talking about stopping the Empire, there's a strange noise from the south of town. As you approach the south entrance, Tessarosa is there. He tells you he got attacked while searching the nearby tower where the Empire is conducting their experiments.

The tower you need to go to is the Promontory Spire, and it's west of Centaurius along the shoreline.

If you haven't already, you should upgrade your Energi Rings before going on. Look for the Researcher here in front of the Weapons Shop.

Also, be sure to hit up the Weapons Shop and upgrade whatever you can.