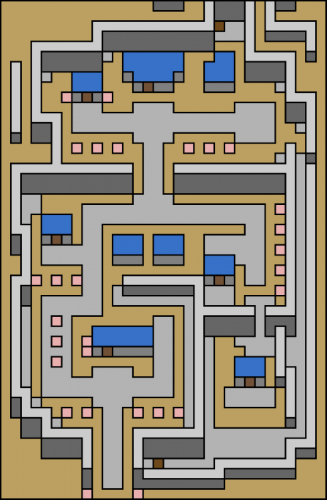 Map of the Town of Heiland

The game starts with Ash and Karim standing guard outside of town. Suddenly, two strangers come running out of the forest, followed by a group of soldiers. The strangers, Princess Shion and Wied, are attacked by the soldiers and call out for help. Ash and Karim come to the rescue.

The first battle in the game is Shion and Wied versus three unknown soldiers. You have no choice but to lose this battle, so just put it on Auto, and lose quickly.

After losing to the soldiers, Shion calls for help, and Ash and Karim face off against the same three soldiers. You're pretty much guaranteed to win this battle no matter what you do.

Caring For the Wounded

After the battle, Ash's sister Eclair comes and tells Ash their dad is looking for him. Ash, Karim and Eclair take Shion and Wied home with them so they can recover. Ash's father, Denim, tells them as soon as the strangers regain their health, they have to leave town.

Shion regains consciousness, and tells Ash that she's on her way to join the resistance to fight against the Schwarzschild Empire. Ash volunteers to accompany her and Wied far enough that they can find a ship to take them to the resistance headquarters. Karim talks about everyone making preparations to leave, and mentions that he'll be in his room whenever Ash is ready to go. Now the game jumps to the Town of Heiland, directly in front of Ash's house, and Quest 01 is added to your Menu.

There's not much to do really to prepare. You should explore the town and talk to all the people if you want. There are three treasure chests in Heiland: one is in the northeast corner, another in the southeast end of town, and one is in Ash's house on the second floor. Make sure you get the treasure in Ash's house and in the northeast corner before you tell Karim you're ready to leave town. Otherwise you won't be able to get it until much later in the game.

As you're preparing to leave town, there's a commotion outside. It seems the Rosenkreutz are still searching for Shion and Wied.

This is another fairly easy battle; just be sure to watch everyone's health, and use a Heal Drop if necessary.

This is a battle that you must lose. There's no way to beat the Sergeant, as he does 9999 damage every turn. However, after the battle, Ash's father comes to the rescue. He tells Ash and the others to escape while he deals with the Sergeant, and then the game puts you in the southern part of Heiland, and you're no longer able to approach Ash's home.

After the battle with the Sergeant, it's time to get Shion to the Town of Heim. The only way to get there from here is to go through the Cave of Lahnt to the north (which is a really easy cave, so no worries.)

If you want, you can check out the Weapons Shop and Item Shop in Heiland before you leave, but you don't really need to. But, you should unlock the available side Quests, if you're interested in completing them all.

Once you're ready, leave town and head to the north to reach the Cave of Lahnt.