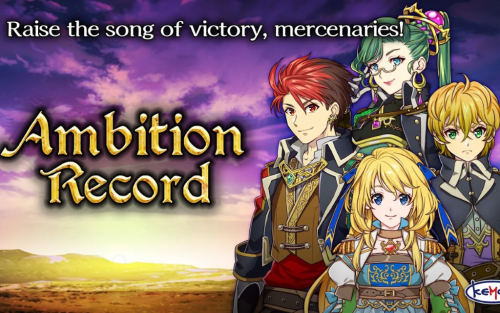 There are 3 reviews for 'Ambition Record'.

A Half Decent Game

Ambition Record had the potential to be a pretty good game. I enjoyed the characters & dialogue, the Job System, Skills and equipment customisation – the normal ending part of the game was enjoyable, though a bit too easy.

You can only level to 99 and Job level 10, which is easily do able during normal. Locations, dungeons, etc are small and easy going and boring. There is little opportunity to farm skill enhancers etc – not that you need them.

2 of the Jobs can only be obtained through the in game shop and are entirely based on luck as they are random. This is rediculous in any game, but especially one where levelling is not necessary and locations are few and boring.

So what is there to do in ‘post game’? Basically – not much!

2 new fighting locations (which are tiny)
I think you maybe able to do more arena in post game
And the ‘end boss is the same one, in the same location as the normal ending

The equipment customization was interesting, but I felt as though I had wasted my time buffing my stuff – didn’t need it with these enemies.

Ambition Record had the potential to be a really good game, instead it feels like half a game. Maybe they ran out of money or time half way through? Or maybe they just couldn’t be bothered!

When before purchasing Ambition Record, I checked around our forum to see what other people thought of it. For the most part, it was compared to Sephirothic(SS) Stories and Dimension Cross(DC) which makes sense due to it’s 3D aspect. After finishing the game with the true ending, Ambition Record is more of a cross between SS/DC and Exe Create’s Dragon games i.e. Dragon Sinker, Lapis, Alvastia Chronicles, Heir of Kings and Liege Dragon.

Graphics: The graphic are clearly an evolution from SS & DC with the maps being 3d. NPCs are less detailed than the party and main characters but, there are fewer npcs than most games so it isn’t as noticeable. Battles are 2.5D, with the party using the same graphics that are used out of battle unless they’ve reached Lv5+ in one of the game’s job classes.

Story: The story revolves around a group of mercenaries tasked with defending the kingdom of Francia against a skilled sorcerer who has stolen the power of the kingdom’s King Dragon. Most players will figure out what happens before the characters do however, there were a few twists that surprised me later in the game.

Job System/Skill System: There are 8 job classes in Ambition record, 2 are locked behind the game’s premium lottery and 1 is gained by finishing one of the game’s subquests. The Job system is similar to Dragon Lapis’ if the skill plate system didn’t exist. Like in Lapis, a character can only use a job’s abilities while in the job which limits customization. At job levels 1, 5 & 10, new passive abilities are learned and once a job is mastered(Lv10) the character now has those passives no matter what job they are in. Skills only require MP aside from one skill which reduces HP to 1 so MP management is important.

World Map: Similar to SS, DC and Liege Dragon, Ambition Record’s world map is not explorable. Instead, a list of destinations are listed and the player just chooses where to go with the next story destination listed.

Weapon System: Like many of Exe Create games, weapons can come with a + with the max being +99. Weapons can be combined to increase the bonus and transfer effects. The “Forging Ore” item can be used to transfer bonuses and attributes 100% instead of roughly 50%. Special effects can be found on dropped/found weapons and can be added by sacrificing accessories most of which can’t be bought.

Difficulty: There is no difficulty option to choose. Ambition Record’s difficulty does spike when entering a new area for the first time until you level up enough times. Otherwise, the game’s difficulty is dependent on how much you improve your weapons, equip weapons and armor above what an area roughly requires and complete bonus areas.

Shop & Lottery: The premium shop uses ARP to purchase items/accessories and to play the two different lotteries. ARP is very easy to acquire at 1 point per battle which is a good thing due to a stupid decision to lock two of the game’s jobs behind one of the lotteries. Most of the shop items as usual can be found in game aside from the no-encounter ring and increasing the maximum amount of weapons that can be carried by the party. Aside from earning ARP from battles and paying money for ARP, premium tickets can be earned to play the lottery by completing a few “achievements” and by finishing the “extreme” training course that is unlocked after earning the game’s normal ending.

Non-story dungeons and Post-game: As you go through certain dungeons, there will be a sign present indicating that you shouldn’t go in due to how powerful the enemies are(relative to when you’re first exploring the area). The game will never require you to enter but, various stat boosters and more powerful equipment is available in these areas.

After earning the normal ending, two new dungeons are added with one being required to get the game’s true ending while the other is optional. The optional dungeon’s enemies are weaker/equal to the “extreme” training course which are far more powerful than what was fought in the final dungeon. Additionally the game’s final subquest is unlocked which is a boss fight.

Ambition Record was a much better game that what I had expected going in with a enjoyable story but, the problems with the job system don’t help it.

Well,that was a short(if you rush it)or long and super tough one(the tough part is getting premium ticket from extreme course…for foresight book and fascination book)the game have a nearly useless mini map…you barely need it,most of the powerful equipment locked by the d**n item crafting(astro and shining set)oh and you can get the best dragonstone there too,well you can just get one SR dragonstone later in game for free tough