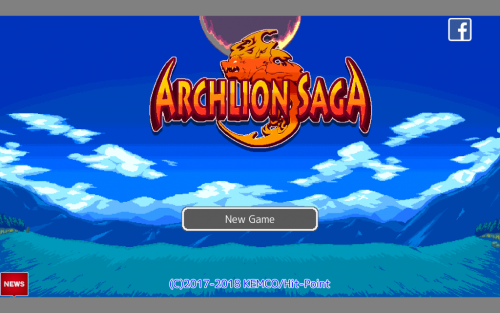 There are 4 reviews for 'Archlion Saga'.

Archlion Saga is a turn-based JRPG and part of Kemco’s “pocket-sized RPG” series of short, easy, beginner-friendly RPGs. This review is for the Nintendo Switch version, which has no in-game purchases.

The story of Archlion Saga starts as a standard JRPG, but offers a handful of surprises and plot twists that the player may or may not see coming, right up to the end. It is somewhat hampered by the iffy English localization.

The gameplay of Archlion Saga is extremely simplified, and so easy that it is nearly impossible to die. The entire party acts as a unit rather than individually, and has a shared health pool. There are only a few available skills. Purchasing or finding equipment upgrades is a fairly basic affair, although there are a few items with trade-offs.

Navigating dungeons is simplified by an option that summons arrows telling the player which way to the goal. A handful of extremely simple puzzles are present.

The greatest drawback to Archlion Saga is that it is extremely short. Beating the game takes roughly 1-3 hours. There are no sidequests. A new game+ mode exists, for what it’s worth.

I’m new to Kemco rpg’s having only played Revenant Saga and this. Unlike RS I can’t understand who this game is for. It’s a very simplistic turn-based game though the barebones story is quite dark. The translation is accurate though dry and lackluster.

If for newcomers to rpg’s this may work though it’s simply far too short. If for children to get into the genre it doesn’t work as the story is dark devoid of humor.

I can’t recommend this game. Was played on Nintendo Switch.

Shorter than Eve Of Genesis

======== First Impression
Before playing, I expected something like Eve Of Genesis.

======== Comments After Playing
Shorter, easier, simpler than Eve Of Genesis. I think it was more fun (personal taste), even with the bitter end (which I’m not fond of)

By the way, this pictures pretty well how shallow many Kemco games are. Can be considered a game Which review the classic Kemco game (except shorter and not cheesy, and graphics are also simpler)

======== Rating Summary
This is meant to be a short game, so don’t dare to compare rating with other titles. Even with Eve Of Genesis.

Gameplay was OK, not remarkable, there was a couple of fun puzzles but controls were difficult. You cannot visit previous areas but there is little to no need to do so.
After all, not many items to buy, and even less worth a purchase.
Gameplay -1, Control -1, final score: 4

For combat, it is as simple as it can be. It’s in pratice a 1×1 fight, although if you are facing a big enemy party, you’ll deal less damage.
Pretty simple, not remarkable, minimal use of status effects…
It’s good enough to deserve the 4. Not exceptional enough for the 5.

As for Story, it is alright. I don’t like “bitter-sweet” endings, where not everything can be saved (even if it touches the heart or whatever), but it was well done to deserve 4 starts.
It’s not behind the same cliché from Kemco, but without an alternative ending on NG+, this means…
Story: 4 stars

======== Monetary Worth
The game is free. And don’t buy the star generator thing. Not worth it.

Once upon a time I started playing the game called Archlion Saga. Knowing that it’s a short game I didn’t have any high expectations from it. And that’s why I wasn’t disappointed at all.

The game starts like many other games. One person is meant to become a hero and save the world from the known evil. So we go through small maps automatically grinding, visit new areas (you can’t go back to any visited place until NG+) beat more monsters and eventually bosses. So the battles aren’t important here. The Hero [and the three other people who join him to support(which turns out to be as good as the Hero]) learn some skills which are important to use because the final areas can be tough.

The story is good. That’s all there is to tell about it.

If you don’t expect the game to be complex then it’s the game for you. It’s definitely worth it to play it once. Just once.