To reach Gloamfel Ravine, fly east of Shawarl Checkpoint until you see a cave completely surrounded by mountains. Fly just north of that cave, and you'll see a couple of grass tiles at the edge of the forest. Land here and walk to the cave entrance.

Olivia says that there's a shrine somewhere on the other side of the Ravine, and so that's probably what you need to find here. After the dialogue, enter the Ravine and get ready for one of the more confusing dungeons of the entire game.

On the first screen, get treasure T1, then head to exit A in the southwest corner. On the next screen there are 5 treasures to collect, T2 to T6.

Now take exit B to the central area of the ravine. Not only is this room confusing as all get-out, but it also leads to several different exits, only one of which leads to Gloamfel Shrine. But before you go the shrine, we want to explore the rest of the ravine and collect all the treasure (and follow the path to the Rest Stop, to unlock another Subquest.)

First, collect treasures T7, T8, and T9, then start heading for exit C in the middle of the room. Use the Recovery point when you come to it, then walk forward for a Boss battle.

I had Lucile use Call + Hit Me on her first turn, and had everyone else use their strongest skills.

Once I learned all the skills I wanted, I had Lucile use Thermal Strike (although really, just about anything would have sufficed.)

After the battle, go use the Recovery point if you need to, then take exit C and get T10 and T11.

Now go back to the central area, and jump down the ledge immediately below exit C to get treasure T12.

Now, go all the way to the left, and then jump down the next ledge and start out for exit D. Take the secret passage to get T13, then go through exit D, get T14 and T15, and then exit to the Rest Stop. (Covered in detail on the next page.)

Now head back into the ravine, and go to the central area. Collect treasure T16, then go through exit E and get T17. (Note: the exit that leads out of this room will take you to a stone monument that doesn't come into the story until the New Game+, so just get the treasure on this screen, then go back to the central area.)

WARNING: When you go to get T19, be careful not to jump down the ledge that puts you back at the start of the ravine! If you do you'll have to retrace a lot of unnecessary steps.

Now go back to the central area, and go all the way to the northeast to get T20. Now take exit G in the southeast, and get T21 and T22. Then, take exit H, and get T23 and T24, and then - follow the path to the exit to Gloamfel Shrine. 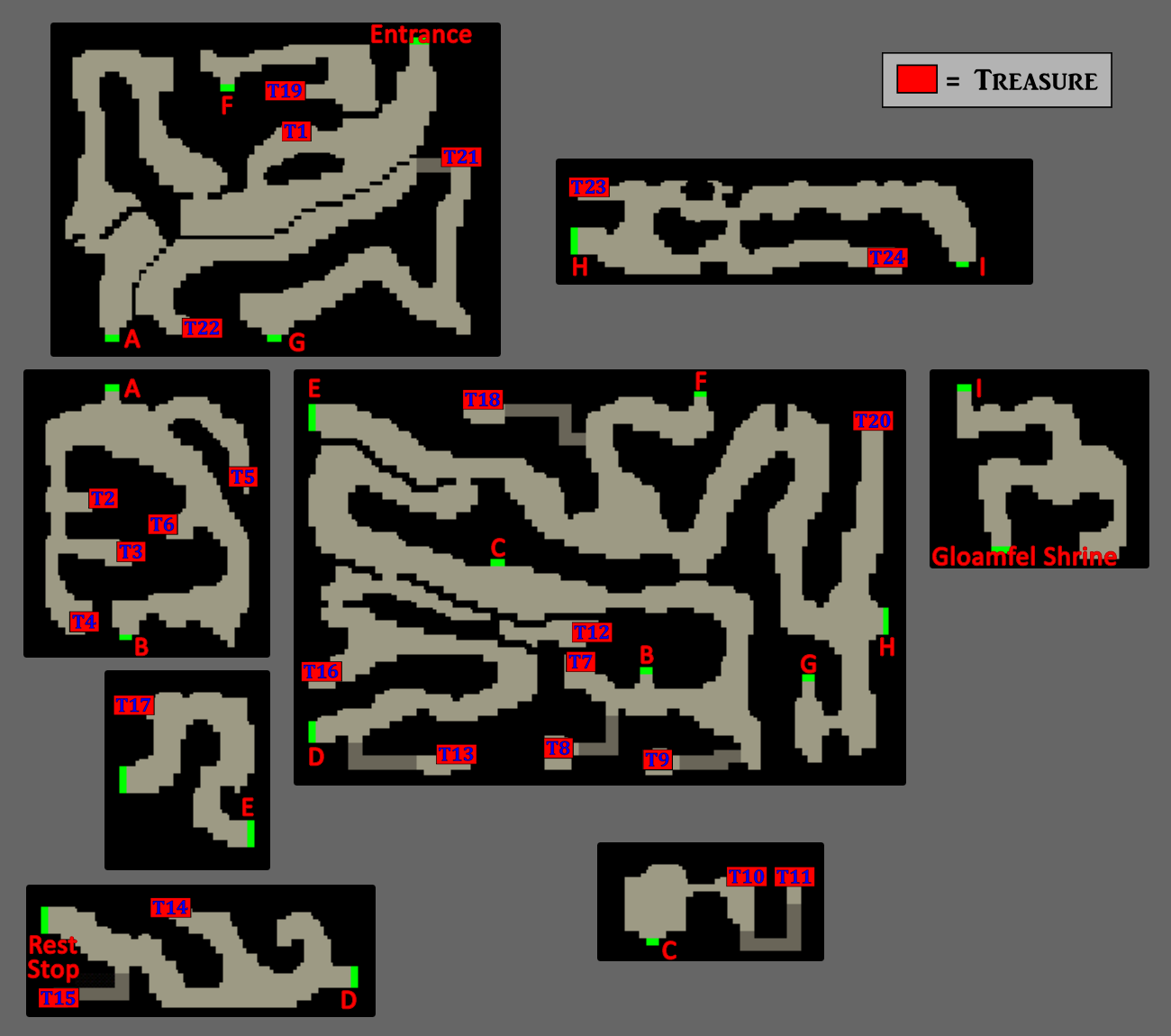