Once inside the castle, Harvey and Amelia lose their disguises, and Amelia says you should head to her room to plan your next move.

You can sort of explore the castle while you're in here, but if you approach any of the guards, they basically tell you that you can't go that way.

Get the first 6 treasures, and then take the stairs in the north to Amelia's room. (The last treasure is in her room.)

As Harvey and Amelia are talking, the impostor comes in and sees them. Knowing she's been caught, she makes a run for it, so now you have to track her down. (But first, get the treasure in Amelia's room.)

You'll find the impostor at the entrance to the throne room. Select "It's time to unmask her!" and then watch the scene to learn the impostor's true identity, and the reason why it could never be revealed to Amelia...

Meanwhile you also learn that Duncan started this whole ordeal so that he could take over the kingdom. Then, you get to fight him.

For this battle, take out the soldiers first, then focus everything you've got on Duncan.

I had Amelia use Attack Down on Duncan to lower his ATK and INT, and Harvey use Triple Strike.

After the battle, Duncan summons the Shadow Deity to help him.

Since Stone Colossus is Shadow-based, have Amelia use Light Thunder as much as possible.

Meanwhile Harvey's Triple Strike will be his most powerful attack.

If Stone Colossus uses Full Guard, have Harvey switch over to magic attacks.

Make sure to watch everyone's health in this battle, as Stone Colossus can do a lot more damage than Duncan did.

Stone Colossus is strong, but as long as you keep Harvey and Amelia alive you should be able to win this battle.

After the Boss Battles

Then the soldiers come in, and Amelia sets things back in order in the castle. However, there's some concern about the Shadow Deity having appeared and murdered Duncan, so the ministers suggest that you travel to Tenebrant and see if you can find out more about the Shadow Deity's motives.

Harvey and Lucile agree to accompany Amelia, and Lucile joins your party.

Before you can leave for Tenebrant, though, you still need to do a few things in Luminia City.

First, exit the throne room to learn more about how Lucile learns skills. Then, exit the castle, and after the dialogue, go to the Inn and talk to Olivia. After that, you should explore the Chancellor's Mansion for some treasure and another learnable skill (it's not part of the story, but it's worth exploring, now that it's open.)

Remember to equip Lucile with a weapon, armor and jewels! I recommend the Skill Doubler Jewel and the Titan Jewel, but you can use whatever you want. 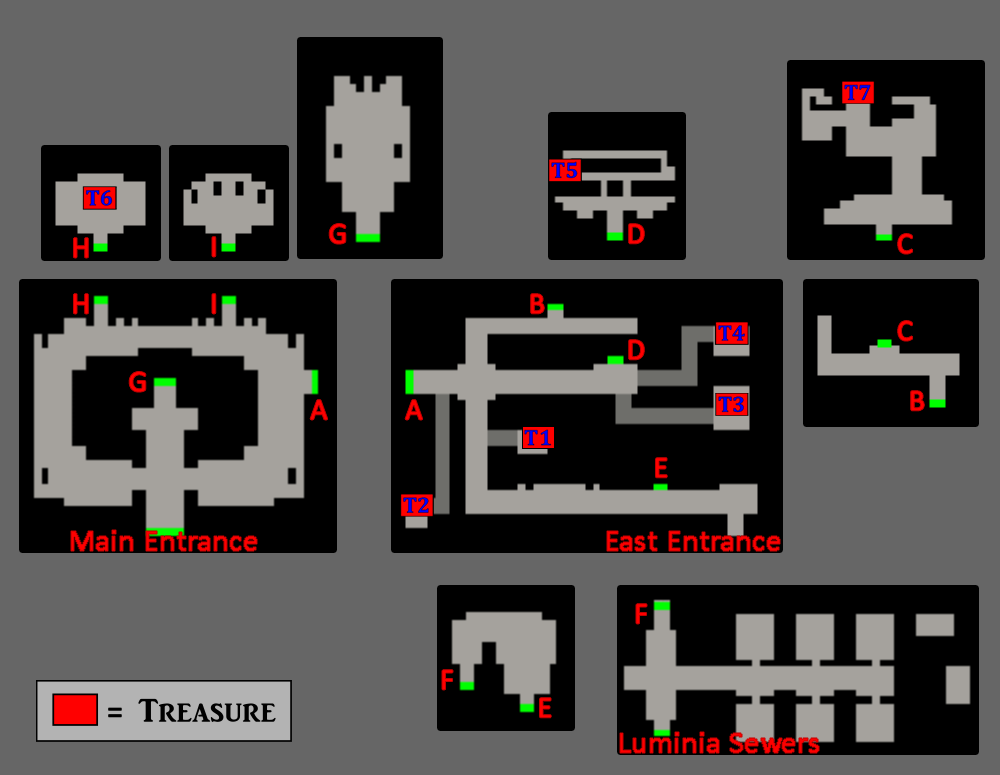 Lucile learns Ram and Molecular automatically as part of the storyline.

But, if you talk to the Luminia Soldier in the middle of the room that leads to the east entrance, he'll teach her Transform.

Additional Skill
After teaching you Transform, the Luminia Soldier mentions that he knows a Tenebrant Soldier who's also researching skills in another town. This soldier is not IN Tenebrant City though; he is located elsewhere...

The dungeon area in Luminia Castle is now accessible. (Well, once you have Lucile in your party, and then exit Tenebrant City and re-enter, then, it's accessible.)

There are three treasures in the dungeon, all in secret passages.

If you talk to the Luminia Soldier who taught Lucile Transform on your first playthrough, this time around he'll give you an Experience Trunk.