To get to Mashrowe Village, go east on the World Map until you come to two bridges. Go north across the second bridge, then turn west and go north across a third bridge.

(There's a fourth bridge in this area that leads to the northeast, but that's not the direction you want to go right now.)

After crossing the third bridge, go west on the World Map until you reach your destination.

When you enter Mashrowe Village, go to the house in the northwest corner of town. In here you'll meet with Dallin's Subordinate, who tells you that Dallin is out at the moment but he should be back tomorrow. Harvey suggests spending the night at the Inn, which is due south of Dallin's home.

After the scene at the Inn, go back to Dallin's house. Harvey explains the situation, and Dallin says he thinks you can get into the castle if you deliver the crystal that's to be used for the king and queen's headstones, but he's not so sure how to expose the impostor.

Harvey asks if the Mirror of Truth might be used to expose the impostor, and Olivia says she thinks it could.

So, now you're off to Rhutti Mine, to search for the Mirror of Truth.

If you get the Warehouse treasure here, I highly recommend that you equip Harvey with the Broad Sword and leave it on for the remainder of the game. (The Broad Sword targets all enemies.) Also, do everything you can to raise the Gnome, Swoon, and Critical stats on this weapon.

I also recommend equipping the Rare Jewel on one of your characters (at this point, it doesn't matter which one). With this jewel equipped, the enemies will be far more likely to drop Rare items.

03 Find Me If You Can - Talk to Matthew outside the chapel. 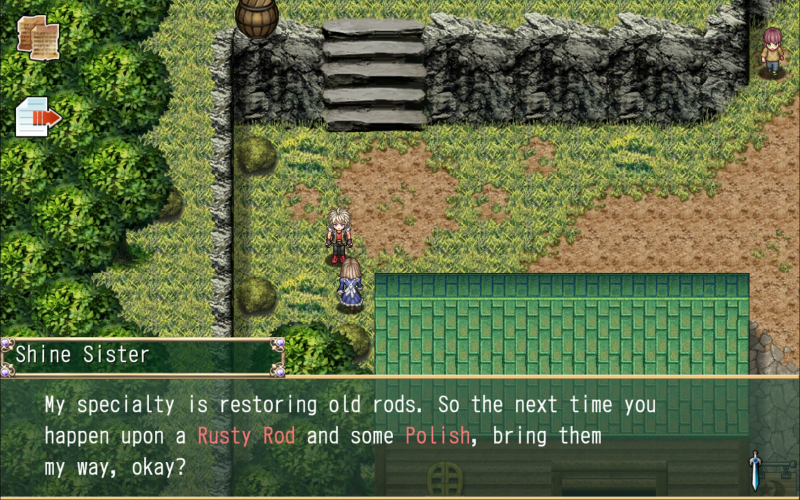 The Shine Sister in Mashrowe Village will shine a Rusty Rod (which, unfortunately, isn't available until the second to last dungeon in the game.)