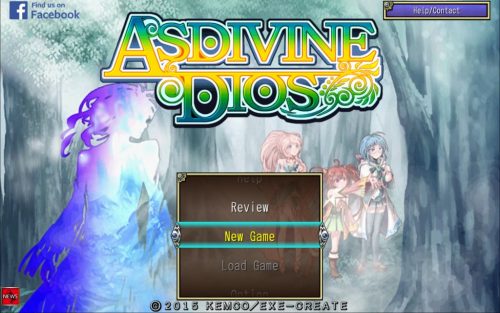 There are 5 reviews for 'Asdivine Dios'.

Overall Pretty Good, but not Great

This is an overall pretty good RPG. The battle play is good and the battles are fair with some good skills. I do think that the female characters all crushing after the main male is kinda disturbing, but makes for some interesting conversations. The story does have some repeat value with the different endings for each character. The second playthrough will give some extra items or content backstories of the characters.

The controls are fine; they’re intuitive and natural enough.

Some thought and care went into the game’s story. The premise is that you are the deity of the world, but due to unforseen circumstances, you find yourself stripped of powers. Your ultimate goal is stop a pair of evildoers from destroying the world. While the plot itself is cliched, the beginning is at least atypical. The game’s main characters fit a lot of typical molds. That said, they are well-fleshed out and have a little depth. The game also has a lot of romantic dialogue and whatnot that somewhat detracts from the story.

The game’s mechanics are your fairly typical rpg game elements. You can cast spells that use MP, and you can also use skills. These skills require BP. Crafting is rather boring and fairly typical; you get items and can upgrade them using other items. There aren’t any special field mechanics; however, the warp flowers (seen late in the game) are somewhat unique.

The game seems fairly balanced. Spells and skills seem balanced relative to each other. While some bosses required some excessive grinding on Expert, it wasn’t overbearing, and the free game can be reasonably played on normal difficulty. One issue is that bosses tend to require much higher levels to kill than the surrounding field enemies. Another flaw in the game’s balance is that it almost trivial to maintain high health and high MP. Bosses generally kill you by either getting several more turns than you (their speed stat is somewhat ridiculous) or by instantly killing you (generally with magic). Lastly, gold is a bit too plentiful. It’s quite easy to gain millions and have nothing to spend it on.

The game is somewhat polished; however, there are some issues. For instance, when you set up battle tactics, most of the tactics state that items will never be used; however, this is only true for Pulverize and Onslaught. The others actually do use items, so this is in essence a bug. Mistranslations and typos, while uncommon, are noticable at times. There was also an occassion where trying to access options would result in a black screen. This was a major bug as it required you to reload from an earlier save to fix it.

Well, this game is not too good and not too bad either. It’s decent but some of the weaker points are the magic skills and rewards. You can get TOO MUCH gold from battles and there will be no shortage whatsoever. I wish there were more magic skills in the game as there are many empty slots. The dialogue sometimes can be cheap and the ones with humour in them are not always so funny.

Well, new Asdivine game... and it's difficult to live up to Asdivine Heart.