Due south of Atlantica, the path is blocked by arrow tiles. Head east, and look for a signpost with directions to Atlantica, Priya Temple and Curme Ruins, and a Dead End. Go south to get a treasure, then follow the path all the way to the southwest corner to get one more. (You may have noticed a narrow path to the east next to the first treasure - this path is also blocked by arrow tiles.)

Now go back to the signpost and head for the northeast corner of the screen. There's a narrow path along the north edge of the screen, that's got a treasure on the west side. Follow the path to the east, and continue to make your way to the northeast corner. When you're almost there, take the narrow path to the south to get another treasure. Now go back to the main path and go north, and step on the pentacle to enter Priya Temple.

Izayoi examines the door that Aqua put in place to keep others out, and determines that he can't open it without putting himself in grave danger. Freya suggests you return to Atlantica, and see if Kahuna can think of another way to enter the temple.

Kahuna says the magic founts in Asdivine might be able to help - but Izayoi says the fount down here is in the temple. One of the sprites suggests you have the sprites being held in the ruins (Curme Ruins) lend you their powers. With their power and yours, it should be easy to remove the seal.

Kahuna agrees to break the seal on the ruins, so that you can get inside and rescue the sprites. The Curme Ruins are south of Atlantica.

When the dialogue ends, go back to the Undersea. There's a scene with Lamerick (the first sprite you rescued) and Maidame Curie. In this scene you discover that Lamerick abandoned the village he was supposed to protect (the same village that was recently destroyed by monsters). Some of the humans from this village escaped, and sought protection at the closest spirit tree.

Lamerick put up a barrier to protect them, but it wasn't enough, and the monsters got through and killed everyone - and, as we see in this scene, the people who were killed included the girl who Odium lost, and the reason for him wanting to destroy everything.

After the scene, start making your way toward the southwest corner of the screen. When you get in that area, take the big path to the east to get another treasure. Then, go all the way to the southwest. Along the way, you'll pass another path that's blocked by arrow tiles.

Go through the exit in the southwest corner, and you come to the northwest corner of the second screen. South of the entrance, there's a raised platform with a treasure and a Recovery point, but in order to get to it, you have to take the long way around all the coral. There's another treasure due south of the platform.

After you get those treasures, go east. There's another treasure along the south edge of the middle of the path, and one at the very end of the path. Below this treasure, there's a sort of a secret passage to a lone island in the center of the screen. There's one treasure on this lone island. After you've got all the treasure in this area, go back to the first screen and head for the southeast corner.

When the path splits, go south, and go through the narrow pathway to the east to get a treasure.

The Path to Curme Ruins

Go back to the main path, and go all the way to the east (past the path to the exit). Get the treasure at the end of this path, then go back around, and take the exit on the southeast side of the screen.

Follow this path to the west, until it opens up into a large area. There's a Recovery point on the east side of the path, and if you go northeast of the Recovery point, there's another treasure.

Go back to the main path, and take the northwest passage all the way to the end to get another treasure. Now go back and take the southwest passage. There's a small room off this path with two sprites - the one with blue hair is an Item Shop, just in the middle of nowhere. Buy some healing items if you need them (but you probably won't), and then keep going west to get to the pentacle to the Curme Ruins. 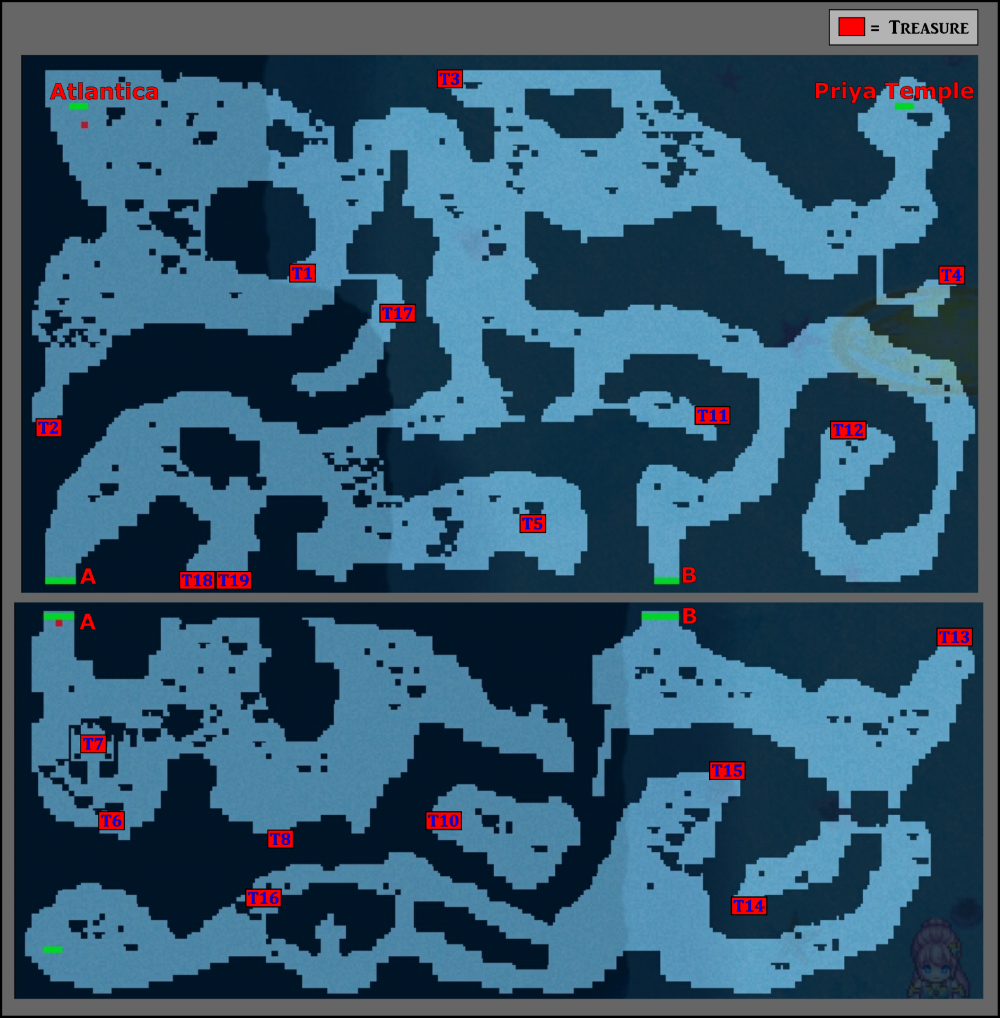