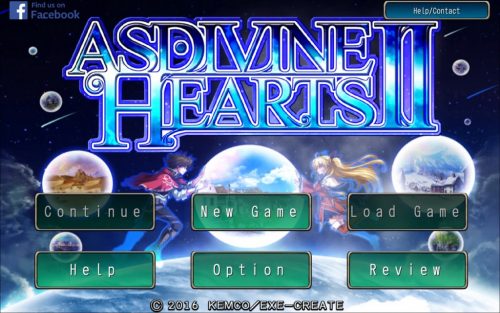 There are 4 reviews for 'Asdivine Hearts 2'.

Could have been better

I enjoy all the Asdivine games and the quirky characters that inhabit them, so I was really looking forward to this game. It started out really exciting, but somewhere along the line it seems like Exe Create just got lazy and said, “okay don’t worry about the story anymore, just focus on cheesy jokes and have all the girls fawn all over Zach.” After that I just couldn’t get into it.

The first indicator to me that a game in a franchise I love is missing the mark is when I ask myself if it deserves additional time for me to write a review. Sadly, most of the aspects of the game that are favourable are ones that are familiar, as anything new tends to have some gross strings attached. I’ll never ream a game for using good ideas, even if they are recycled from elsewhere, but those good ideas alone don’t overpower many shortcomings.

Although this is the 5th game in the Asdivine series, note that it is only connected to, of course, Asdivine Hearts. Dios and Menace share a setting, and Cross is kind of debatable. As such, it’s highly recommended that you get the true ending in Asdivine Hearts 1 first, for maximum context. In case you don’t, there’s a primer available in-game. If you know the first game already, that primer is pretty hilarious.

The new combat system sees the inclusion of partners, which I’ve always loved. It’s a great way to have easier balancing while making sure that we can still get our favourite characters into battle. But all of the good setups require a very specific arrangement of characters whereas, in the past Asdivine games, you could just do it without worry. Only the vanguards can use their Trust Gauge ability, meaning you need to constantly be moving characters if you want to use specific abilities. Pairing Zack and Stella gets you a bonus with certain equipment, but Stella can be partnered with powerful monsters. It’s clear that the game wanted me to be constantly shuffling my party layout but that’s just a huge hassle, especially since the rock bottom difficulty curve means you never need to optimise.

On the visual side of things, we still have our super impressive battle sprites. I’d take high-quality puppetter sprites over over Dreamcast-era 3D models and VFX any day. The character busts all got a big facelift and they all look great. Although it is strange that the Queen, who had a bust before, now lacks one. In fact, this ties into another problem.

The game loses major points due to sparseness. AH had passable mapping which only got better throughout the series but AH2 has houses devoid of all decoration and furniture. Dungeon elements get brought up and then don’t show up again in any meaningful way. Very little of the fun exploration is present. The mapping and dungeon designs feel lazy.

Borrowing from Antiquia Lost, characters now have unique map abilities. I’ve always loved this in games (Wild Arms, for example). It’s tied to your Trust level and even with save-scumming and the items found in treasure chests, your trust level with any particular character cannot possibly reach even the 2nd tier without relying on arena awards or cash items. This means you will have to remember which dungeons had locations to use your map abilities, then return after much arena battling. It’s a step back from a previous game without adding anything to rebalance it.

Another system which I’m always all for, and they didn’t screw up or counter is a benchmark trophies system akin to Compile Heart games. I forget if this is EXEC’s first game to have this, but basically, everything from opening treasure chests to raising your combo count unlocks reward items at each of 3 different tiers. I always love these systems in games.

Where I think the game really flops is the story… errr… stories. Rather than the usual main game and post game stories that EXEC games favour, they go with a semi-trio of shorter tales (two connected, one sort of not). This just isn’t a good format for this game, as I found my interest in what was happening waning very quickly. This is due to the individual tales not being developed enough on their own so they lack a feeling of gravity, despite each threat being massive in scope. It’s kind of amazing how you can have multiverse-ending cataclysms just not feel important.

The new addition to our party is fun and enjoyable but she really only interacts much with Zack and Felix. Stella gets the character dev shaft, which is a huge shame. Felix gets the shaft too but she can manage on the sole merrit of being Felix. Stella had lots of options to grow and the game didn’t bite at any of them. I do have to give credit for Uriel’s main-story character growth because it’s really quite good. It goes out the window in the final arc but I’m glad the devs remembered her and gave her a chance to shine.

It’s a major annoying trait of a game when they step on their own toes like this and it makes reviewing it difficult. Many of the aspects which are good also come with a drawback, like an adorable puppy with explosive diarrhoea. Return of the Rubix system? Awesome. Need cash or gems to fully use it? Not awesome. Cool new partner system? Awesome. Gimped by low implementation? Not awesome. It’s difficult to give pros and cons when every pro has a con holding it back.

I regret that I can’t recommend this one at full price. It’ll be fine on sale but as it is, I just don’t understand what they were thinking.

Asdivine HEARTS 2 continues the story of Zack and his companions (both new and old) as they travel through a new adventure in a new World.