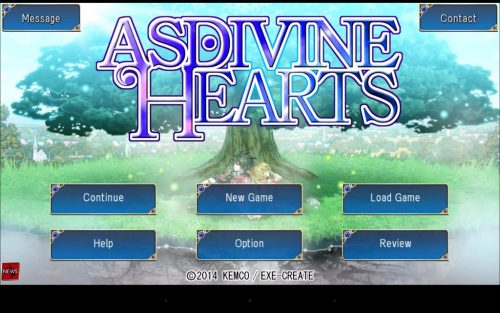 There are 7 reviews for 'Asdivine Hearts'.

This romantic comedy is an older Exe-Create game and rough around the edges, but still very fun

Grinding 100 “ADH points” for a key sold in the menu shop is the only way to get access to Asdivine Hearts’ sole optional dungeon, Trial Tower. Trial Tower is the best place to grind experience for postgame challenges; it also contains top-tier weapons and armor, an optional boss, and a handful of comedic story scenes.

On the Wii U, Asdivine Hearts has a minor bug that appears when purchasing the Trial Tower key. When I tried to buy the key, the game displayed a red error message saying “Current inventory has exceeded limits for a transaction”. I was still able to complete the purchase by hitting the confirm button on the controller, and saving the game when prompted. The misplaced error message did not prevent me from accessing Trial Tower.

Asdivine Hearts is one of developer Exe-Create’s earlier RPGs, and it shows. Some common Exe-Create gameplay features are absent (there’s no minimap) or pricey (the item to teleport between towns costs an in-game “Guild Coin” currency that is difficult to obtain, and better spent on other things). The gameplay has starkly unbalanced aspects, but is still very fun and engrossing.

The story of Asdivine Hearts is primarily a lighthearted romantic comedy between the hero Zack and the women in his party. There is a serious plot about a conflict between the Light Deity and the Shadow Deity that threatens the world of Asdivine, but the most cruel and tragic events are relegated to the backstory and never directly shown.

The story isn’t exceptional; anyone familiar with anime-style romantic comedy tropes will recognize various setups, such as the obligatory hot springs scene. The serious side of the plot has its interesting moments, but the overall story is mostly predictable. The player can choose which party member Zack grows closest to through a handful of optional dialogue choices or by giving gifts; don’t expect a Persona-style dating simulation.

The gameplay of Asdivine Hearts will be very familiar to anyone who’s played an Exe-Create game before. There are four difficulty options that can be changed at any time. Easy is for players who just want to see the story without stress; Normal is balanced to minimize required level grinding (except for some postgame challenges); the higher difficulties are for players who want to test themselves (and don’t mind grinding).

As usual for an Exe-Create game, battle statistics are extremely important, especially Speed, which determines how often the player or the enemy gets turns. There is a simple formation system that can benefit the party, although the player unfortunately can’t change the party’s formation in mid-battle.

Asdivine Hearts’ most unique feature is its jewel grid; each character can equip a “rubix” that holds jewels, and the player can collect and insert jewels into the rubix to teach characters magic spells, power up battle statistics, or gain other benefits. Some jewels even have both beneficial and harmful effects, and synthesizing weaker jewels into stronger ones is a useful undertaking. Squeezing the most out of each character’s jewel grid often involves careful deliberation and trade-offs.

Selecting each character’s armor and weapons also requires some thought, as certain pieces of equipment have both advantages or disadvantages. It’s notable that ordinary, in-game gold is never worthless in Asdivine Hearts. For most of the game, the party will have to budget their funds carefully; in the postgame, the party will have plenty of gold, but there is a perpetually repeatable option to trade ludicrous amounts of gold for “Guild Coins” that can purchase items not sold in ordinary stores.

Asdivine Hearts has a fair amount of side content to supplement its dungeons and its story. There are a total of twenty optional sidequests, as well as optional arena challenges, an “infinite enemy” challenge, and a “gazillion challenge” where the goal is dish out the most damage possible in twenty turns.

There are also nooks and crannies on the world map to explore, although many of these hidden places feature monsters that will stomp a novice party flat. When a shipwright delivers the fourth-wall-breaking warning “Save your game before exploring a new island,” he means it.

Asdivine Hearts has five party members, each with their own unique special moves. A “special move bar” system rations how often special moves can be used; each party member’s special move bar replenishes gradually and naturally while in combat. The jewel grid makes it possible to teach each party member a wide assortment of magic spells (although acquiring the necessary gems to teach magic may require grinding Guild Coins at the arena). The result is an impressive amount of strategic options in battle.

The flaw of Asdivine Hearts’ battle system is that there are a lot of unbalanced, broken overpowered aspects – both for the player and for the enemies. The “Trust Gauge” abilities are absurdly strong, especially on lower difficulties (the most overpowered ability is allegedly toned down on the highest difficulty). Both players and enemies can trigger “Limit Breaks” to get a lot of extra attacks; in practice, this means that any boss or strong enemy can suddenly get a Limit Break and crush the party, although this is quite rare on Normal difficulty. Getting ambushed can very easily be a game over, due to the extra damage done by attacks from behind.

Despite its issues, Asdivine Hearts is a thoroughly enjoyable game that will keep the player occupied for quite some time. It’s worth a solid recommendation, even if it’s not quite as polished and fine-tuned as Exe-Create’s later offerings.

this is one odd game! no mini map! and way to many monsters spawning! in fact asdivne 2 is way better then this one! as it has a setting to change how many times monsters spawn!

I’m surprised that it’s been years since this game came out, and there’s no walkthrough on here like there was for Asdivine Cross (which I absolutely loved, btw). I was following some gameplay on youtube, but I was looking for something more detailed like what was made for Cross, including treasure map for each area. Also, the fact that there’s no mini-map really threw me for a loop. Walking around blind really starts to wear on you after a while, but I plan on playing this through before playing part 2 and working my way up.

Overrated and not worth $6+

One of the most highly praised aspects of Asdivine Hearts is its story, but the story is honestly not good. First, the characters are annoying if anything. None of them feel unique or relatable or otherwise “good.” In addition, every character seems to fit some kind of common cliche or stereotype. Furthermore, the asides that the other characters make towards the main character feel awkward, and they get old quick. The plot is by no means interesting; it is not engaging and feels very cookie-cutter. Even the twist that is typical to the Asdivine series of games feels generic and does not help redeem the story. Overall, the story is acceptable, but no more. It is by no means top tier.

The one good thing about the game is the rubix system since it is unique and not something seen in many other games. Some people may be annoyed by the puzzle-aspect of the system, but it is not too hard to figure out and work with. One flaw with it though is that the controls are poorly thought out and require and excessive number of taps.

Overall balance for the game is mediocre. Up until normal end, an excessive amount of grinding is not needed. It is only past normal end where grinding becomes an issue, even on easy difficulty. There are also too many boss battles in this game. You cannot go five minutes without running into another dungeon with another boss. There are probably like 30-50 bosses in the main story arc alone. That’s ridiculous and adds unnecessary time grinding to the game. Another issue with the game balance is that the majority of skills and spells are useless, so you end up spamming the most useful ones all the time and fail to use the other ones. This is not a major issue as it is inevitable with the number of skills and spells in the game.

Overall, Asdivine Hearts was a very lackluster game that is alright and not much more. It is definitely not worth $6+, but if you can buy it during a sale (when it is worth something like $3 or $4), it may be worth the money.

In the Top Tier of Kemco games...

Asdivine Hearts is one of the best, most polished games Kemco has released. The characters are likeable and well written, and the story is pretty decent. Translation seems a bit better than other releases. Gameplay is fun– battles are well animated and they had a pretty good character/creature designer for this title. Skills are equipped in a tetris like board, which isnt my favorite but it works. All in all highly recommended!

My first Kemco game, and it's damn good

The story is a bit weak (later parts of the game), but I love the characters. And the whole customization isn’t as annoying nor overpowered as later Asdivine games. This game is purchase only (no freemium version), because there’s not as much gem-grinding as those later games. Quite good.

I like the idea that characters have their own specialized elements. And you can later learn other elements (with customization blocks), which allows you to learn combined-element. I guess if you somehow learn all elements, you are going to have ridiculously overpowered combined-magic. But even that won’t be enough to beat the secret boss if you don’t think things through. Very nice.

.....its better then it sequel

How is that possibble for a prequel,has a more excellent thing then the sequel
1.all of chracter has a certain thing that make them look perfect(like stella,zack,uriel,celine,Gloria)compated to it’s sequel the different was a total big gap
2.the story and ending was perfect(while the sequel was………)
3.the bonus dungeon at here was far more perfect than sequel