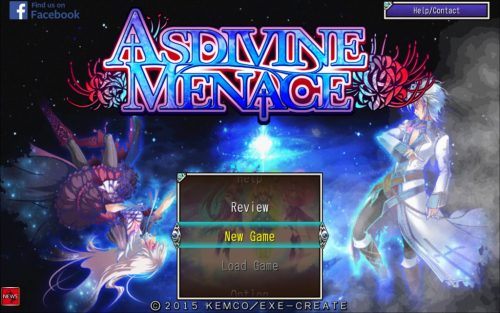 There are 4 reviews for 'Asdivine Menace'.

A Worthy Sequel to Asdivine Dios

Asdivine Menace is a direct sequel to Asdivine Dios that runs on a similar underlying engine, so many of my remarks here will reference and make comparisons to Dios.

The characters are very well fleshed out and really add to the storyline. One nice thing about Menace (as compared to Dios) is that the romance side of the characters was heavily toned down. Characters like Noelle and Nemesis are memorable and have their unique aspects. The plot on the other hand could use some work; it’s another pretty generic one that is more or less a continuation of the plot from Asdivine Dios. If you found Dios’s plot to be okay, then this one is around the same quality.

The game’s mechanics are fairly typical, and if you played the prequel Asdivine Dios, they are almost entirely the same. You have MP to cast magic and BP to use skills. Unlike MP, BP recharges each time. One difference from the prequel is that in this game, you can level up skills by using them frequently. This makes them more powerful, and when the skills reach level 20 and 50, they gain extra effects. The downside to this system is it somewhat locks you in to using certain skills based on choices you make early, and this is an issue since you do not know what the additional effects are in advance. There is also a crafting system that is mostly unchanged from Dios though they did make it where you can transfer and upgrade weapons sooner by lowering the requirements. Overall, if you liked Dios mechanically, this one is basically the same but slightly better.

Balance is much worse in this game compared to its prequel. In particular, magic has been nerfed into oblivion; whereas it was useful in Dios, it deals far less damage than your skills in Menace. This might be a side effect from allowing skills to be upgraded. They also added charge time to Quattro Pressure, one of the more useful spells from Dios, rendering it useless. Gold is still as plentiful as ever, and it is even easier to maintain enough BP to use all the skills you want. Overall pacing seems reasonable enough if you play with double encounter rate though bosses still tend to be much stronger (as in you need to grind a level or two stronger) than the surrounding field enemies.

The game feels somewhat polished. In some areas, the game feels a step forward and in others a step backwards from the prequel. For instance, translation errors and typos seem to be much more common in this version. (They are still relatively rare, but if you are reading attentively, you will notice quite a few.) Using the upgraded Death Slash skill against enemies in the rearguard always results in a delay for some odd reason. The same bug from Asdivine Dios where saving over a file that has already
seen the ending once (while committing to the same ending) exists in this game as well.

Overall, if you liked Dios, you will like this game. It is around the same quality; the story and characters are somewhat better than in Dios, but the game’s balance is slightly worse. I would not recommend buying the premium version as it is rather expensive ($7 or so) and the lack of replayability means it is not a great deal. If the premium version is on sell for say $4, then you should consider buying it to support the developers. (The perks are certainly not worth it although no ads is always nice.)

I love the storyline and humor/emotional. However, this was my first rpg and I could have used a more informative tutorial. I mean, I spent an hour trying to figure out how to use unisons, since the help section wasn’t very, er, helpful, in my situation.
Also, WHY is it so difficult to get the pearls you need for Maid Weapons sdkfjdkls
Lastly, Murk Abyss is a nightmare, even with the minimap.

Where can I find the 6 bright pearls?
I need them for the door that gives Noelle maid’s weapon.