Bonds of the Skies 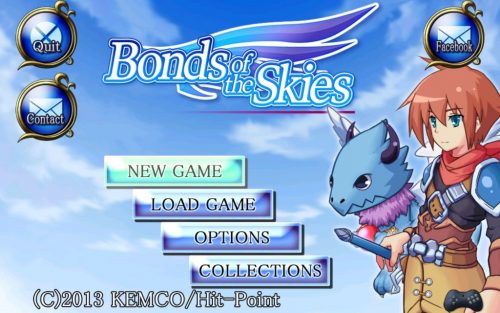 There is 1 review for 'Bonds of the Skies'.

Some grinding is required for the postgame, and some sidequests are obnoxious

Bonds of the Skies is a JRPG with turn-based combat, by developer Hit-Point. This review is of the 3DS version, which has no in-game purchases. Other versions, including the Switch version, do have in-game purchases that will drastically power up the party.

The story of Bonds of the Skies has a few surprising or amusing moments, but it’s largely a trope-driven anime/JRPG plot. The hero is a “genius-ditz” – he’s utterly clueless about common social norms, but shockingly insightful when it comes to precarious negotiations, with humans or with godlike beings. The hero befriends a mysterious spirit in the form of a small blue dragon and, in the usual JRPG tradition, sets off on a journey to prevent catastrophe from befalling the world.

The turn-based battle system of Bonds of the Skies is pretty basic. Although characters naturally learn DOZENS of skills as they level up, they can only set a TINY HANDFUL of these skills to use in battle, an arbitrary limitation that drastically reduces one’s strategic options. Skill selections can be changed at any time out of battle, at least.

In addition to skill selection, one can customize the party by choosing which spirits to pair with each member. Spirits level up with the party, and different spirits confer different benefits… but in practice, it’s rarely worth the effort to shuffle spirits around.

Perhaps the most frustrating aspect of Bonds of the Skies is its required level grinding. The limited customization options, as well as the game’s innate scaling, means that sometimes the best (or possibly only) way to beat certain bosses is to grind out a few extra levels. This isn’t too severe during the main game, but if one wants to play through the postgame story, then the only way to beat the final postgame boss is to get grinding.

The good news is that levels fly by very quickly while grinding, assuming that one grinds enemies that yield optimal experience. For me, the final postgame boss only required about 20-30 minutes of focused grinding to get into the recommended level range.

The bad news is that sidequests are NOT useful for level grinding, because sidequests send the party against enemies that yield too little experience (at least by postgame standards). Worse, some of the sidequests ask the player to find and kill random encounter enemies that are extremely rare.

The English localization is passable. In may ways, Bonds of the Skies itself feels passable… not great, not terrible, not particularly memorable, just another helping of JRPG comfort food.