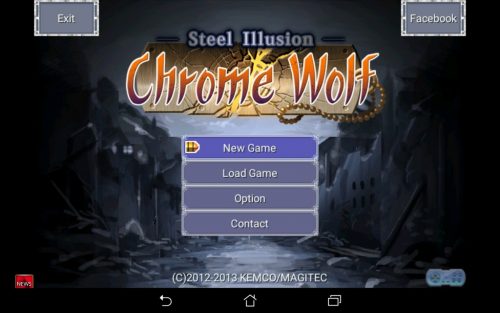 There are 2 reviews for 'Chrome Wolf'.

Steel Illusion - A story about Betreyal and Atonement -

Steel Illusion is one of MAGITEC best game during their active status year.
A game about a civil war of two forces, the Empire and the Unicornians.

— Background —
The protagonist, Kruz, and his comrades were assigned a mission to invade a “base” of the Rebel Army in order to suppress their power, but they soon discovered that everything was a lie and that it was just a normal village.
Abel, a Protagonist comrade, refuses to continue their mission and decides to aid the Unicornians in their escape, which leads to his death as a betrayal to the Empire. Kruz was forced to kill innocent Unicornians, making him do the same thing Abel did. Kruz was given a final wish by Abel, and he followed it, soon joining the Rebel Army and atoning for his sins, as he believed his life had no purpose than dying. The Atonement soon led him to do the cause that would end this Civil War.

— Gameplay —
The tank is the most important aspect of the game; the better your tank is, the greater the flow will be.
The game also introduces MAGITEC’s early multi-class system.
Magic won’t help you much if you have stronger guns and skills. That’s not to say you wouldn’t use it.

— Conclusion —
I’m not good at writing reviews, but Chrome Wolf is an incredible game from KEMCO/MAGITEC.
Chrome Wolf is one of the reasons I enjoy KEMCO games and was one of my first experiences with them.
Dark Story is more of a thing to me because I’m interested in playing the game because of the way the story progresses, the portraits, and the character development.

Chrome Wolf could use some more content, but I don’t mind, and I’m sure you will once you try it out.

Usually, MAGITEC’s game has poor graphic, short playtime, and old sound effects.
Despite of all these weakpoints, Chrome Wolf has the best story that I’ve ever played.