Chronus Shrine and the Gates of Time

Back to the Beginning

Sheesh! This is where it all started. Talk about "time rewinding!" 🕔🕓🕒🕑🕐

Poor Kuril. So young and naive. Always easily fooled, and by the same bad person, no less.

Kuril, of course, knows her mother died. However, she is unsure if her father is dead, too. So, she's holding out hope that her daddy is still alive. That hope is her strength, and it's her downfall.

Geppel had promised Kuril that her father was still "alive," but he had just been too busy to meet up with his daughter. Because of Geppel (falsely) telling Kuril her father was "alive," Kuril never gave up hope of finding her only living parent after losing them a decade ago when she was a toddler.  Kuril is so desperate to have her father in her life.  👨‍👧 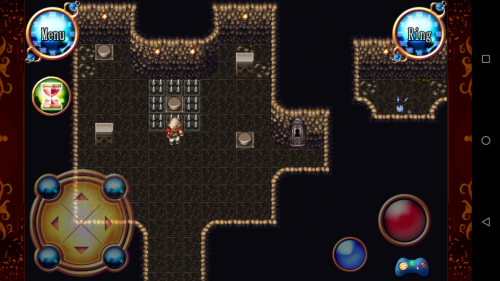 Do you remember the rooms immediately before the room with the Gates in Chronus Shrine? It is a room with three Switchpads on the floor.

Beyond the door in the NE corner of the room that the puzzle will open, is an itsy-bitsy corridor with a Mining spot. 🚪

Just beyond the small corridor are the Gates of Time - and a battle with Geppel!

In the puzzle room or in the little corridor, heal up and save the game before you move on to the battle. 😥

The room with the Gates of Time will have the battle with Geppel. Of course we'd catch up to him! Geppel informs us that Teth already has the Chronus Fragment that was from Kazoo Tower. Gee! That was mighty fast! How convenient. 🤔

(*sigh* I miss him.) But I really wanna kick his butt!  Teth owes us a fight we will win. He has turned us into ragdolls too many times. We deserve to be able to pay him in kind. 💪👊👊

Kuril took off right before the battle, so I couldn't get her stats.

My team was OP, so don't feel your team has to compare to the one I had if your stats are nowhere near mine. (I had to do a lot of repeat stuff for vids and screenshots, to jog my memory. I had to accurately record everything for the Walkthrough. Because of that, I ended up "grinding" more than anyone normally would.) 🏋️🏋️‍♀️🏋️

This entire part of the game is automatic, so I couldn't stop to get Kuril's stats. Apparently, by the time I could get the stats, I forgot to do it. Geppel was an easy fight for my team. I suspect under normal circumstances, he would be a formidable challenge. You'd be wise to prepare accordingly for the battle. ⚔️

The Geon Tech is not necessarily helpful for boss battles. But if I removed it, I may not have remembered to re-equip it. It's a pain to realize that when it's too late. So I just keep Geon Tech equipped. No harm, no foul.

Also, Sarna has "Royal Yell" which heals the entire party. It doesn't heal much, and it costs 23 MP. Whereas, using Cures [5MP] or Full Cure [10 MP] will most likely give a full heal, or a three-quarter heal to the entire team if I have Geon equipped to be used for an AOE spell. In that vein, Geon is a good Technique to have equipped on Sarna at all times.) .👩‍⚕️

*Cleric was the first Class change for Sarna. After changing Classes, I later learned I didn't get Levels high enough to learn all the spells available to her (and Kuril, too) for that Class. This is the second time Sarna has been in this Class. 🔙

Geppel, with all the sinister words he could muster, mentioned that Zars is a puppet, a corpse, a living-dead being. 🧟‍♂️

Kuril will re-join us for this fight with Geppel.  The terribly sad and tragic news about her daddy makes her loathe Geppel. 😔

Gepple is strong against Ice (so don't use Diamond Dust at all!) He is weak against Fire, though.

If Kuril has the Magic attack, "Explosion," use it on Geppel. He is quite weak against it.

Use the usual buffs, debuffs, and strong attacks to win the battle. 💣

When Geppel comes to his senses, does he have a story to tell! 📖

A Campfire Story by Geppel

Now that the spell Galbure placed over Geppel is finally lifted, Geppel has returned to his nice and kind self. The teens listen to what he has to say.

There is a reason, indeed, why Galbure wants to collect the Chronus Fragments. Ten years ago, Galbure did something unthinkable to Geppel, Zars, and Rastora.

As of right now, Geppel knows that Galbure has a big plan in the making in order to bring his evil scheme to fruition. The scheme? It's real bad. It's very evil.

King Minel was still alive during the last Time Rewinding 10 years ago. Geppel served in the Gozless Castle under King Minel. One day, King Minel asked Geppel to check on Rastora.

Simultaneously, Kuril's father, Zars, was doing the same thing. The two men ended up running into each other in Rastora Forest.

In the forest, Geppel and Zars noticed Galbure using Forbidden Techniques and trying to bring Rastora back to life!

An interruption here: How'd Rastora die, anyway? Maybe another hint at a possible new story? Maybe the game did have the cause of death and I just don't remember it.

Galbure used a number of Spirits, from humans and animals, as well as his own, in a futile attempt to bring his Teacher, Rastora, back to human life. The life of Galbure's beloved Teacher could not be restored.

Back to the future: Loka and Sarna realize that a person can no longer be human if they invoke a Spirit Technique. Therefore, Galbure cannot be human.

Geppel mentions a little twist to that common rule. Perhaps, it was a "little twist" that Galbure either took for granted or was able to discover through years of experimentation and/or study.

Geppel says that Galbure used several spirits while using the Forbidden Technique. Since Galbure didn't put the entire burden on his own Spirit, he only became an old man - not devolved into a beast.

The animals whose spirits were used for the invocation became demons, and Rastora unfortunately turned into a monster.

Surely, none of these unfortunate happenings were in Galbure's plans.

Despite the setback, Galbure wasn't ready to give up on his plan to get back Rastora. Monster Rastora had been locked away behind the Gates of Time for 10 years. Galbure waited for the opportunity to undo what he did and return Rastora back to the living with this Houra Festival's Time Rewinding.

When Geppel and Zars happened upon what Galbure was doing in the forest that day 10 years ago, Galbure asked the men to gather the Chronus Fragments for him. The men refused, apparently realizing the madness and evil in Galbure's intent.

Galbure and Zars were both pupils of Rastora. Perhaps Galbure was outraged at Zars for not wanting to help their esteemed Teacher. Galbure's powers were indeed the much stronger of the two men. Galbure cast dreadful Magic on Zars and turned him into a puppet for his own self.

Now, Zars is nothing more than the soulless remains of the man he once was. A corpse. Zars is also behind the Gates of Time.

(And your party will run into him, of course. I wonder if Geppel led Zars behind the Gates of Time? The two men had a connection, after all, since they both defied Galbure.)

Galbure's current plan is to go beyond what any person could fathom. He is going to use the Spirits of the Kiribay people for his resurrection experiment! Galbure will sacrifice an entire kingdom of people to revive one person with a Forbidden invocation that is sure to fail anyway!

Before going any further, I want to add two things here.

First of all, at least we have an idea why Kuril was acting strangely in Leviathan Cave after the battle with Zars. Maybe she felt a connection to him. Or maybe she sensed something not right about fighting Zars. Or maybe his subconscious was telegraphing a message to her.

Secondly, it is beyond coincidence that both Geppel and Zars would be sent to the same place to do the same thing.  There must have been more going on behind the scenes that Geppel didn't know.  Who knows? Maybe there's another story in the making there.

The thought of the people of Kiribay being used as an experiment for Galbure's sinister plan is so overwhelming and tragic to Sarna. She runs from the Shrine to go warn her father, the King of Kiribay. There's no stopping her!

We must go after Sarna, and speak with the King, too. Figure out our next move. There is so much more to do. So much to resolve. And so little time to do it.

Quickly! Get to the Castle!