You're here because of what the Tavern Manager said about Kuril, and what little bit you learned about Geppel. Kuril's gonna be late for her own concert, so you need to act like her Fanclub President. You can woo her into returning to Sein since she loves her fans.

You'll have your first "real" activities with puzzles. There are five of them in Elda Tower.

This is your first big adventure assignment in the game and, as you'd suspect, you're going to have your first boss battle.

(Yep, Rastora Forest's wolf-thingy Quest was a small sampling. 😉. For Quests, I don't refer to the suppression of enemies as Bosses.  The enemy and demon you defeat in each area at the end of the Dungeon is referred to as a Boss.)

Wot?? How easy were you expecting things to be! C'mon! You live for these challenges. Boss battles are child's play.

Exhale. You'll do this without breaking a sweat.

If you look at the blocks for a moment or two, you should notice their pattern.  Then you'll know what to do to open the door on the right side. That's where you want to go first. 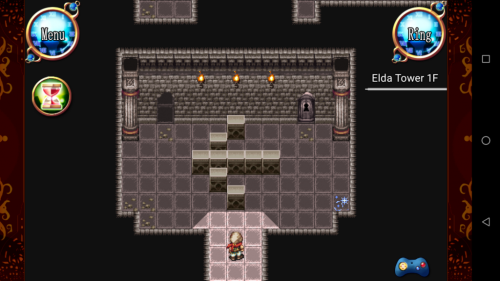 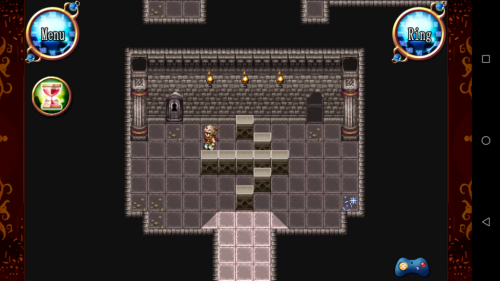 Solve the puzzle in the next room, then take the stairs up to the second floor.

On 2F (east side) grab the Treasure: Quon Technique.

Return to the Main Room. Switch blocks back to the way they were. Go through open door on the left side of the room to reach ...

Kurius is here to give you a few Boost Manuals. Kill the demons on the floor. (Don't just sneak by them. You need the EXP and Gold. Trust me.) When all that stuff is done, use the stairs in the SW corner.

You found Kuril. She wants you to bring her the Hammer she somehow no longer has.  So... whatcha waiting for? Go get it!

Apparently, Kuril couldn't solve the puzzle in the room to proceed. 😉 Just a guess.  That's ok, though. Leave it up to us.

Loka and Sarna offered to find the missing hammer for Kuril. When Kuril wouldn't answer their question about a man with a Mohican, the two Heroes became quite irritated with the little brat. Kuril told them she'd listen to what they have to say if they bring the hammer to her in Sein. Hmph. I'm irritated as well.

Video Solution. Don't cheat! Only if you're stuck.

The mons here are incredibly OP; but you will yield great XP, Gold, and higher-level mats that are needed for Reinforcing. Just be careful!

NE exit has another puzzle. Not too bad to figure out. Will include a vid in case you have trouble.

Return to previous room and go up the SE stairs to 5F.

Save the game before entering the next room. Heal and replenish MP. Prepare for your First Boss Battle! 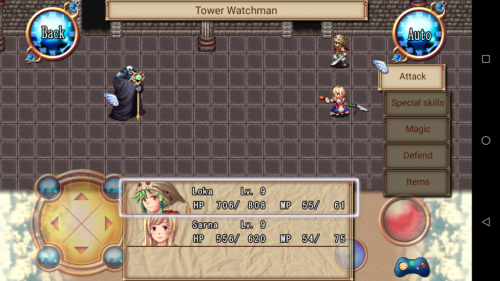 Along the way to here, u gain a "Power Gem" and a "Protection Gem." Now would be a good time to use them.

Use consumable Elemental attack Gems on the demon boss.  Oddly enough, the Fire Gem did a lot of damage to the Boss, even though he uses fire-based Magic himself. Maybe I just got lucky with one of those surprising and rare fluke attacks.

The Watchman hits hard with Fire spells.  Stay well-healed. Your fledgling team can only get hit with so many 250-300-ish attacks before the attacks become incompatible with life.

Use Magic on the boss. He has a high resistance to physical attacks. Loka's "Thunderball" and Sarna's "First Aid" are important here. Use "Ice" when, or if, you can manage it.

The battle will last ~6 rounds. The battle is mediocre in length-of-time and it's not too easy.

Now that the Battle is Done

He's dead? Then use "Leave" to escape this lion's den after you grab Kuril's Hammer. If you're struggling and can't defeat the Tower Watchman, then walk around a little and level-up once.

You got a good dose of puzzles in the tower. Now you know what to expect.

Return to the Tavern in Sein. Do what you gotta do in town. Kuril joins your party. From here, Sidesia Cave is your next destination.

Before you head to Sidesia Cave, MSG Commander recommends you have: