Get the treasure in the northwest corner, then use your Ring to cross the platforms.

Treasure
BGM: To the Center of Time

Solve the puzzle in the next room and take the stairs in the north.

Note the placement of the three pots. 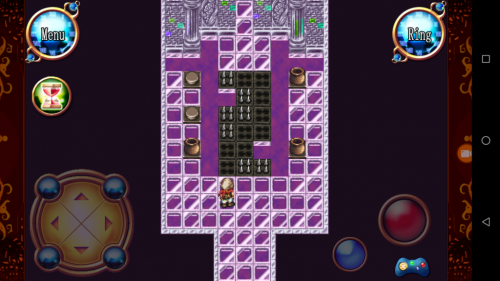 Take the west exit and solve the puzzle for another treasure.

Prepare for the battle of your lives!

If you're able to do it, equip Loka with AOE heal skills for this battle. I didn't do it, and that may be why I had a hard time getting through the battles.

I couldn't experiment with Loka as a Healer for this battle since he hadn't gone through the Cleric Class change. I do have a logic behind why I think you should do it. Anyone's input about it would be great.

Both Teth and Galbure are strong against Thunder skills, which are Loka's best skills. (Makes sense since they are all Sorcerer Knights.)

Both Teth and Galbure are weak against Ice and Physical attacks.

Loka is nearly as fast, if not faster, than Sarna. He's definitely faster than Kuril. So he has the speed to be a Healer.

If Sarna and Kuril can do more damage with their Skills and Magic, and Loka is just about useless for attacks, then why not have Loka be the Healer for these two battles?

If you're gonna try it, then don't forget to switch around your Techniques.

Also, don't forget to let us know if it's a good lineup.

These are my team's stats before going into "sudden death." (Think I'm kidding? Those words are purposefully chosen!)

Each party member has Mastered two Classes. They are on their third Class, and that is Mastered as well. The Hidden Class must still be done. The missing Class is listed.

A cut scene with old man Galbure and Teth.

Galbure orders Teth to deal with us. Woot! I've been waiting a looooong time for this battle. We owe Teth a helluva smackdown! (Even though I despise the thought of Galbure ordering around Teth! 😡)

The battle with Teth is long and hard. Teth is much more difficult to defeat than Galbure, but not as hard as the final boss, imo, if you were to battle him now. I died my first time with Teth. Rushed back in with a vengeance, and we assaulted him. He's the only boss in the game that wiped out my team.

Strengthen your team if you keep failing. This guy is made of iron and doesn't bend easily. Once you go through the Gates of Time, things get real sticky for our Heroes. You will most likely have to do a lot of grinding for XP and Materials to defeat what's on the other side of the Gates. Teth isn't the hardest to defeat, per se, but for what should be expected of our Heroes in relative XP and Strength, Teth is, by far, tougher than the final boss.

Sarna
Freeze Wind (when able to use it)

Don't know where you think you're going or what you're celebrating. You're not done here. Galbure is breathing down your neck! And you have no opportunity to heal.

Galbure gets two consecutive hits per round.

-Strong against Thunder
-Mediocre against Ice
-Weak against Physical

Galbure is quite weak against Kuril's Salamander Hit.

Teth returns to normal once you barbecue Galbure!

Three consecutive boss battles are a little too much for any game.  It may be impossible to defeat what's behind "Door Number One." You will be able to challenge it at any time. Teth will stand there and eternally wait for you to return and fulfill your destiny as his pupil. (That's a little artistic license.)

Since the party is leveling up, I gave a Document of Attainment to Loka and Kuril. They are the attackers and Sarna is usually busy doing healing, above anything else.

All of the Special Skills gained through Attainment are powerful. I exclusively used Loka's and Kuril's during moderate-tough battles.