Reinforcements on any equipment were not done in  Iatt yet. I stayed comfortable in my skin for a little while. They were last done in Gozless before getting to Iatt Path.  Reinforcements will be done again before going into Dragon's Jaws, which is immediately following The Forest of Trials. Needed mats should be amassed by then.

While in Iatt, I did do Class changes on all three chars. There were enough dead enemies in my wake that I could exchange the bounty for CAP. There was enough CAP to purchase two Book of Discipline (to go along with the one Geppel dropped in Milka Villa).

Getting the chars to level-up a little had made a noticeable difference in their Strength. Sarna was changed first, hence the highest Level of the three kids. To get Loka and Kuril to Level 17, it only took 4-5 battles. At that Level, they were significantly stronger.

LATE ENTRY: The second Class changes were done after leaving The Forest of Trials, which is where we get the 2nd Book of Discipline. After all the enemy kills by then, there was enough CAP to purchase the third-and-fourth-of-five Book of Discipline. That's all explained under the Walkthrough tab: "Book(s) of Discipline and Document(s) of Attainment Locations."

Going into Gozless castle, my chars were: 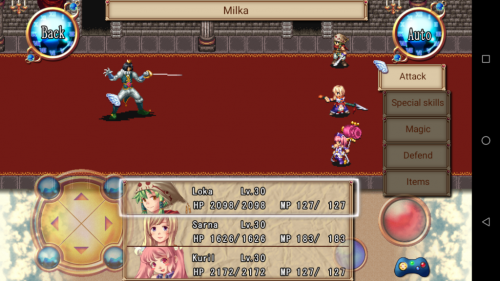 You won't notice anything different in Milka's fighting style, abilities, or strength.

Just do what you always do, and it'll end up the way it always does.

After pulverizing Milka, again, he tells us to go to his Villa. Hopefully, that's where the Orb really is.

For some reason, this place reminds me of a deathtrap. No matter, this is where King Milka told us to come for the Soul-mirror Orb.  Milka warned us about Jonbi, the guard dog.

You need to return to the Office upstairs. The game will automatically lead you to the guard dog who fiercely protects the Orb. Poor puppy! Locked down here all alone. 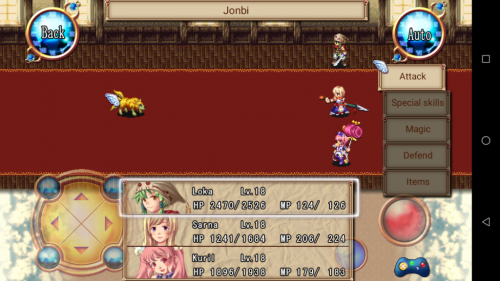 The team's Levels only increased by one from fighting Milka before arriving at Jonbi's room.

Jonbi gives us an easy battle. Done in three rounds. Quite possibly, one round.

Collect the Orb. Return to Iatt and begin to give the Orb to Cordea...