Here we are! The second and last big city on the planet. (We still have one large, and one small, town to visit.)

This place is kinda big. Let's get exploring it.

Tip: The Item Shop sells Superior Holy Water. Get only a couple of them in case they are needed to replenish a fair amount of MP in battle. Otherwise, they are not economically feasible. Comparing price and effectiveness, you'll notice that Holy Water is better for replenishing MP in between battles, which is when you'll likely be doing it.

Go to the Guild to receive their Quests. (We get some interesting and challenging Quests here.) We get two sets of Quests from the Gozless Guild. When the first set of Quests are complete, return to be assigned the second set.

You will get Duties #19-22 after completing Leviathan Cave and checking in to the Guild.

There's a Young Woman in the Guild who gives us good advice about using G and R Techniques together.

G-Techniques are what convert single-target spells into AOE spells. The power and effectiveness of G-Techniques (in particularly, Geon and Rageon) could be impaired since the strength of the spell is divided among the targets. The spell may even "miss" if the effectiveness is too low.

We learn that the previous ruler of Gozless, King Minel, was a kind and wise man. Tragically, he died young. Something else that's unfortunate is the current ruler, King Milka, who is the heir of King Minel, is nothing like his dad. King Milka is a tyrant.

We cannot get into the castle just yet.

We need to gather intel on Geppel.  We learn from a Young Man standing next to the bar in the Tavern about his surprise that Geppel would serve such a king.

That's a curious statement. The townspeople, in so many words, have called the King of Gozless everything short of a tyrant. We believe Geppel to have the same type of personality. What is this Young Man implying? He doesn't see Geppel as a bad guy? Geppel is somehow a good guy? He used to be a good guy? Then what happened to make him change?

The man upstairs in the Tavern adds to the confusion. He says that Geppel used to serve under King Minel. King Minel was a beloved ruler, and everyone speaks fondly of him. His subjects must have been trustworthy and kind people.

Surely, King Minel would not have tolerated any less. How on Earth did Geppel change? I'm sure we'll find out at some point. Let's enjoy the intrigue for the time being.

This man also tells us that we can meet Geppel in the castle.

Now we can enter the castle! Let's go!

The Castle Gatekeeper informs us that King Milka has been expecting us.  Huh? He knew we were coming? One guess as to how he knew!

There is a young boy in town who told us how he thinks the King looks kinda "funny." It seems like "suspicious" is a more appropriately descriptive word. For some reason, the King believes we want to steal his treasure. (Well, we can't argue that point.)

What's this, all of a sudden? We're being captured and jailed? What did we do?? "We" doesn't include who you'd think! A plot twist? A traitor is among us! But who?

Pointing a Finger at the Traitor

Kuril! That's who. We should have guessed. The snotty-nose little kid who's an outsider.

Sarna believes that King Milka, and not Geppel, wants the Chronus Fragment. But why?

Maybe, as Sarna suspects, King Milka may want the Time Rewinding performed just for him to have something mended or returned to normal? But what?

My, my, my! The dialogue that happens between Geppel and Kuril! At least we know now there are more Chronus Fragments and they're scattered around the world. But where?

Loka and Sarna are to be executed!! That's a really drastic measure for two young people who haven't even done anything! Why have them "offed" so urgently? They need to get outta this place! But how?

Kuril??!?? A change of heart? Feelings of regret for her companions who have been loyal to her?? Kuril wants to set Loka and Sarna free from their Death Row chamber.

Kuril gives her travel buddies a logical explanation for her behavior. We're still leery about trusting her and her motives.

Hmmm ... These young Heroes sure have a brave and daring plan about what to do now.

Btw, none of the cells unlock. 😉 But a pot near the stairs has a whopping 770G for you to keep!

You are free to exit and enter the castle. Heal up and stock up if necessary. Prepare for a Boss Battle with King Milka in the Throne Room.

I guess this guy is "funny" after all. He's dressed like a Court Jester. It looks like he's better at bellydancing than fencing! 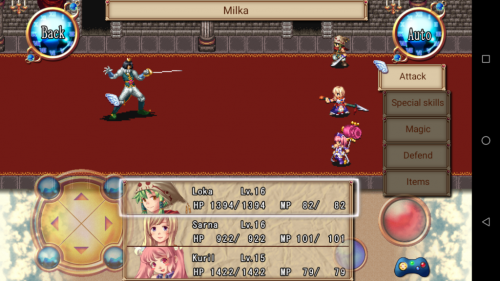 King Milka is susceptible to any kind of physical and magical attack. So give him your best!

Milka only hits once per round, but he has a helluva powerful swing with his blade.

You should be able to finish him off within several rounds. He doesn't do anything fancy or unexpected.

Milka's "Sexy Rose" hits terribly hard. It's worse if he uses "Battle Dance" first to increase his attack.  Keep up your defense buffs.

If Sarna has the Geon Technique equipped, have her cast the Magic spell "Guard Assist." That will increase the entire team's defense against physical attacks in one turn. King Milka typically uses physical attacks.

That battle loot! It's so awesome! Not shabby at all.

King Milka continues to deny any knowledge of the Chronus Fragments (and he sounds convincing). Milka orders one of his soldiers to fetch Geppel.

We learn from the Soldier that Geppel and an unknown man have left the city and are headed to Leviathan Cave.

Well now! King Milka totally loses his composure and becomes incensed. The King bellows how his father had their kingdom's Chronus Fragment hidden in Leviathan Cave for safe-keeping and protection. The King believes Geppel is trying to steal the Gozless Fragment just as he did the Kiribay Fragment.

What is going on with Geppel!?! Is the King deceiving us? Is Geppel a double-agent? And how did Master Teth end up a part of all this madness? Is Master Teth even still alive? What happened to him? Where is he?

The King sides with the Heroes. (For now, at least. Can't, won't, don't, trust him.) We have to halt Geppel's plans and capture him. Immediately!

This is a real good time to grind for XP, complete Quests, and Reinforce equipment as high as we can. We've got some sticky situations coming up in the near future. We will visit Milka's Villa twice, and we will tour Leviathan Cave.

If we remember from other RPGs we've played, a Leviathan is a monstrous sea serpent. Oboy! If the Leviathan Cave is appropriately named, we're going to need spells and items that are effective against water-type enemies, and hopefully susceptible to Energy and Fire since we have those! JS.

Soon, you'll get a second set of Quests from the Gozless Guild that includes slaying the "Giant Sea-serpent." So for now, we're safe from it since it won't appear till we get that Quest.

Let's do a lot of grinding and farming.

We can also grind in Milka's Villa. We'll loot some good & really helpful stuff there. We will have to return to Milka's Villa after completing the Leviathan Cave tour. There will be significant things happening at the Villa by then.

Before any of that, increase your levels and equipment a little. This isn't a game of checkers. Things aren't going to get any easier for our crayon-haired heroes. It's all uphill from here.

Before leaving Gozless, MSG Commander recommends you have: