Travel east from Gozless and go south through the valley between the mountains. You will see Leviathan Cave just west of a bridge. Do not cross the bridge. Just go into the cave.

Be prepared to meet the masked crusader as soon as you enter...

Oops! Too late. (I did say, "Get ready to rumble." You musta forgot that part.) I'll do better next time at being more clear. 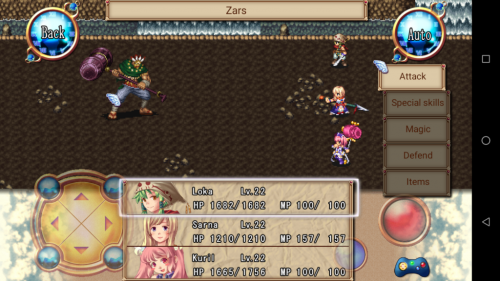 For Round One, have Loka cast "Battle Whistle" on himself.

Sarna should use "Guard Assist." (Hopefully she has Geon Technique equipped for it.)

Zars is susceptible to Lightning. He is strong against Fire and Physical attacks. Use Kuril as much as possible for support since she won't be very effective in this battle otherwise.

My team was Level 22 when they stepped into this battle. It still took 10 turns, I think. I dunno. Stopped counting after a while.

It's a long battle, for sure. If your team's level is much lower than 22, like in the teens, I wouldn't feel too confident about this battle. All my weps and armor were maxed out with the local materials available. Nobody died, or even came close. So, it wasn't a hard battle, just a long one. 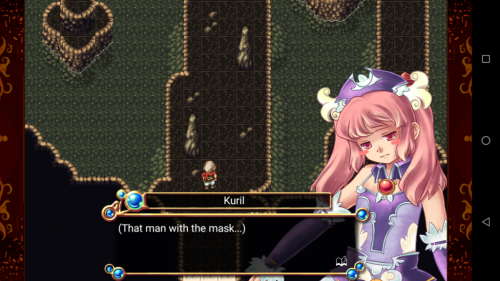 On top of that, Zars was resistant to all of Kuril's attacks.

Why is Zars resistant to Kuril?

If Kuril never met Zars, what is it about him that makes her sad?

Wassup with these two??

Never mind. It's not important.

What IS important is the NPC we know who's waiting for us a couple screens north. 😀

You will also find a P-Technique in the cave. Now you'll have one of every Technique, (and two R-Techniques). A total of six.  Perfect! You have six Techniques to place in the six Technique slots available between all your chars.

Return here later to complete the "Giant Sea-serpent" Quest. The serpent will be located on the same island as where you found the Puris Technique Treasure.

Anyhoo, the surprise is out of the way, so we can move forward. Here is a vid to get through Leviathan Cave if you need the help.

We gained a lot in Leviathan Cave. Well, a lot except for the one thing we wanted: the Gozless Chronus Fragment. We need to go back to King Milka and tell him what happened.

It appears we're really close on Geppel's heels. We see him, he takes off, then we find him at the next destination.

So now, our next destination is Gozless.

NOTE: You can also farm Beautiful Fur from the High Wolf, who will occasionally drop it.
Plus, once you get the second round of Quests from the Gozless guild, every time you kill 5 High Wolves, you get rewarded with 5 Beautiful Fur!