Sorry, I didn't have time to explain anything before you walked in the door. Hope you're still alive and Mohican man didn't make you a mess of mush. 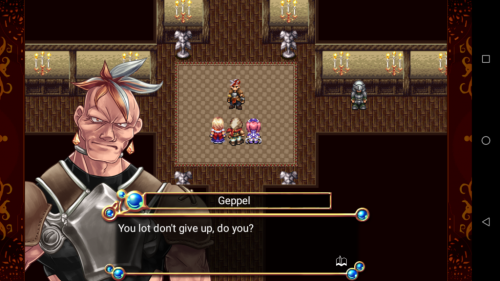 This Villa is quite "a happening" place today.  Everybody wants to kill you.  Everybody.

If you are reading this before entering the Villa, then heal up before you get there.

There are lots of "Happy Birthday!" surprises when you go through doors in this game. And this is one, er two, of those times.

Geppel is standing before you. He ain't going easy on you this time! Your party is in for a big fight.

My party was Level 26 when I came in here. Geppel one-shot a party member, and he did it twice.

I think he's tired of a bunch of kids nipping at his heels. He's about to "open a can" on you! His hits are furious.

(In the next game I played, the team was Level 28 starting this battle.  Having the extra Strength of just two Levels was a phenomenal help. Surprisingly, I didn't need to use *Royal Yell.) 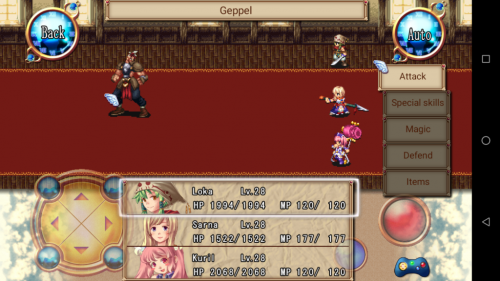 But he is susceptible to Fire. So toast him!

Make sure you use buffs and debuffs. You will need all the help you can get - and with a little luck, the buffs will help.

The battle is oh-so worth it, though.  Geppel drops a

* At Level 27 Sarna learns the Special Skill Royal Yell. Great skill! Invoking Royal Yell will heal the entire party in one turn. So now, you can kick butt and not drop dead doing it! 😁

After thumping Geppel you're still not done in the Villa.

If YOU took the thumping, then head out now to replenish the team while you're still at the entrance.

When you're ready, go east into the next room, and then north. Go upstairs. Do you remember how to do the puzzle? Here it is again if you don't remember how to solve it.

Enter the west hallway. Beat up the quartet of Pancho guards (if they're there).

NOW WAIT!! Don't rush into that doorway just yet. It's another Happy Birthday surprise. Some time ago (in Leviathan Cave), I told you I owed you for not giving you a fair warning about a surprise boss battle. I'm making good on that promise now.  We're even.

The girls need to powder their nose. Loka has to tuck in his shirt.  Ok.  There.  Now we're ready. 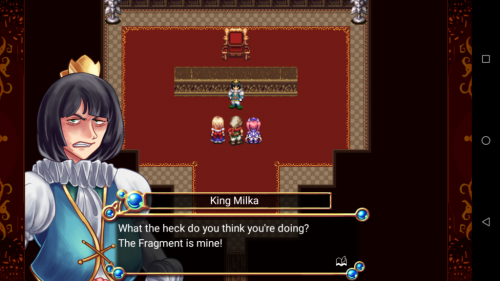 I don't know about you, but I'm glad I don't serve in this King's castle. He's pompous.  He's mean.

A place that sounds like "goes less." Imagine being the King of that!

Speaking of the King, let's get back to the business at hand. King Milka looks like Dracula.

We have to wait for him to get off his "white horse" before we can pulverize him.

I missed the belly-dancing.  Did you? He's actually quite good at it. I'd pay to see it. 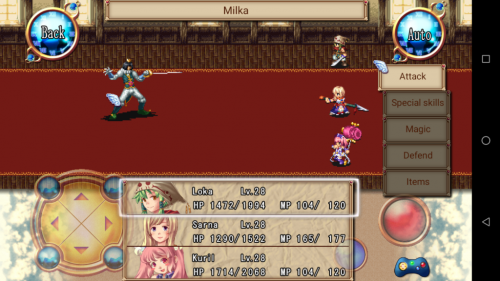 Same as before: he's susceptible to everything. Use buffs & debuffs. Not a bad fight at all for a Lv 27 party.

The reward for defeating Milka has not improved from the last time. Oh, well. Gotta deal with it.

(EDIT: I took the screenshots on my 2nd play through and the team had higher Levels at that time.)

...And just when you thought the long-sought after Chronus Fragment was finally & safely in your hands...

...Another plot twist!! And you're not gonna believe this one! Just remember this one piece of advice:

The big red letters up there are because of the artistic license that allows for drama.

It really doesn't matter how Loka responds to Master Teth about the Chronus Fragment. It's not gonna end well either way.

Don't waste items, Magic, or time. You can't win this battle with Teth. Put it in auto-battle. Just stand there and take the pummeling Teth is gonna unleash on you.  This guy is cray-cray! A beast! A fearsome... .

Pssh! He's just adorable. So nice to see him again.

Go ahead and get a look at him in battle. 'Cause you're not gonna be able to see him for long before it's "lights out" for your party.

What happens when we say we will not hand over the Chronus Fragment:

What happens when we agree to hand over the Chronus Fragment:

There is a difference in Master's attitude between the two answers. When Loka shows hesitation, Teth acts nicer, calmer.

He doesn't need to charm Loka into handing over the Fragment, because he can take it whenever he's ready.  So that can't be the reason why he'd act nicer than if Loka just handed it to him. The kids are obviously no match for him.

Maybe Master Teth is happy Loka has the sense to question such a thing, and feels a thoughtful question deserves a respectable answer?

There's a post by dewfunk in the forums, saying that we can return to the Villa post-game to challenge this fight again. I returned to Milka's Villa after my first play-through, and there wasn't a battle going on anywhere. Not sure if it has to do with platform/ operating system.  I played on an Android.

I thought maybe Loka's response now may have something to do with being able to battle Teth later. The first time I played, I refused to give up the Chronus Fragment. At the end of the game, I couldn't challenge Teth to strip him of his Championship Title. Now for the 2nd time playing, I'm just going to hand the Fragment to Teth and see what, if anything, happens at the end of the game.  Stay tuned.

Maybe the "Dragon" spells, Dragon Wrath & Dragon Thunder, are attacks for saying, "Okay;" and the Zeus Slash is what you get when you question your Master? What have you guys noticed?

No matter.  Why don't WE get Zeus Slash?!? It's so cool! Loka will learn Dragon Thunder and Dragon Wrath from the "Warrior" Class. 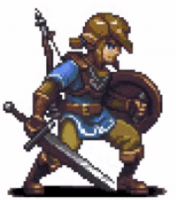 Here we go again. Another love-hate relationship with King Milka.

The King spills the beans. Something about ...

Well, this just got dark.

Kuril knows Iatt Path is eastward. Hmmm. Like eastward from Leviathan Cave and across that bridge? Then I guess we go northeast from there? Yeah. Why not? Let's do it that way. 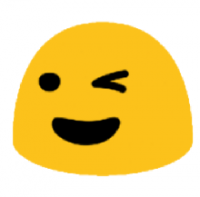 Kuril is valuable and beneficial with her knowledge of geography. Not to mention, she's all stoked about finding the Fragments. She hardly mentioned anything about her daddy.

I'm still not over the shock. Gimme a minute, please.

Before going to Iatt Path, you should spend a lot of time maxing out equipment at the Blacksmith Shop from gathering all the local resources and completing all the Quests (including the second set you get at the Gozless Guild if you haven't done it yet). Before arriving at Iatt Path, this is what I had:

We're off to the world on the other side of the deadly mountain. (Feels like we're getting closer to the eye of Sauron. Going through Shelob's lair. ...)