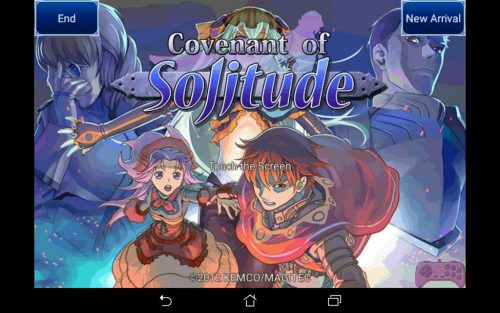 There are 2 reviews for 'Covenant of Solitude'.

Covenant of Solitude doesn’t try to hide what it’s supposed to be. It’s a homage to early NES rpgs that came out after Dragon Quest III. Like those early games, there’s only a handful of important characters that drive the plot. The generic names for the “Kingdom” and “Empire” actually fit because the two having names are mostly irrelevant.

Characters and Classes: The main character Fort is your “Hero” and has a limited mix of skills from various classes. Your other 3 party members have access to four initial classes and four different races which have their own modifiers to a class’ level ups. Early on you have acces to the “Silver Card” which allows Fort and any created characters to change their class to the initial four & Fort can return to his unique class. When changing classes, you retain any skills learned in your previous class. Late in the game(about the last 3rd), you can access a dungeon which rewards you with four “Gold Cards” and you can change into the advanced classes which have their own specialties. Additionally those classes require about half the exp per level compared to the basic classes.

Plot: While it isn’t winning any awards, it makes use of the limited cast and chronicles Fort’s growth as the plot goes on.

IAP: Unlike most Kemco titles, there is no way to earn IAP points to buy things from the “Shop” From what others have said, there isn’t a reason to use the points BUT, Gold cards are added to the IAP Shop once you obtain them.

Difficulty: Fairly consistent but, how difficult battles are depends on your party composition and how much you grind. Bosses are usually the most challenging and once usually the best strategy is to deal with their “help” before trying to tackle a boss.

A bit after this game, Magitec came out with Chrome Wolf. By Kemco standards, it was almost shockingly mature, featuring friends torn apart by a rebellion against a nation’s empire. Covenant of Solitude feels like a trial run for that game. At times amateurish and clunky, one can still see the building blocks of a far better effort on display.

The basic plot: A tragedy tears apart two friends when a girl they’re both pals with is killed by monsters. Fort, the protagonist, is a Genie, meaning he can summon monsters. Legna, his friend, is a more normal guy. Elicia, the girl they’re friends with is the one killed by monsters — summoned by Fort in an attempt to save their village from imperial forces. Fort is jailed and is to be executed by the empire for refusing to use his summoning powers to aid them in their war effort, but is able to escape, where he is enlisted by resistance leader Evans. Twists and turns abound, as Fort tries to figure out if he can actually trust anyone, whether they be friend or foe; while, meanwhile, Legna works his way up in the imperial hierarchy.

Fort is the only human party member, while the other three slots are taken from four monster classes that correspond to typical character classes such as warrior, mage, healer and thief. Unfortunately, those are the only four classes — regardless of Fort’s powers, you’ll never be able to recruit monsters in battle or in post-fight dialogue.

Overall, this is pretty standard “town to dungeon to next town” fare, but with some nice twists and turns that keep the story interesting. There is a pretty high level of challenge, particularly towards the end; however, Fort can enter an “internal world” at any time outside of battle where he can not only swap monsters in and out, but can also purchase items. Obviously, that blunts some of that difficulty when you basically carry a shop with you and, as long as you have money, can buy potions and other items at will.

There also is a sort of laziness with some of the programming. The empire is simply called “Empire”, while the nation funding the resistance is called “Kingdom”. The world map is more a collection of islands and land masses connected by bridges than anything resembling an actual world. As per the norm from Magitec, the graphics and sound are inferior and more clunky than what Kemco’s other teams produce. I mean, the title screen music seems to start looping a few seconds after it starts.

Still, while this game is average at best, it does show that Magitec had talent — it just wasn’t fully harnessed at this point. The story was decent and it was a bit tougher than most Kemco games to get through, so it was an okay time, I’d say.