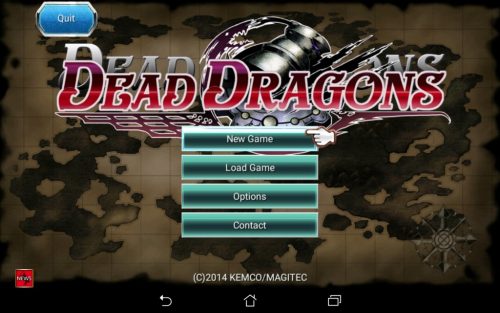 There are 2 reviews for 'Dead Dragons'.

Another prototype before their better titles

Story: The first half of the game rehashes the same dialogue points during each conversation with no plot progression. The second half of the game after you get the 4th party member shakes things up. Suddenly there are six more important characters that regularly interact with the party and several plot threads hinted at during the first half come to the forefront.

Graphics: Non-battle character designs are limited to generic looking npcs. Each of the important characters(party & npc) have different designs but, they look vastly different than any of the generic ones that it’s easy to tell who is important or not. As usual with Magitec, most of the town & dungeon designs are recycled after encountering them. The final dungeon is quite similar to a unique dungeon in Soul Historica with an extended area beyond where Soul Historica’s dungeon ends.

Battle System: It was a unique idea to have a front/middle/rear formation instead of the usual front & back but, by default your characters rotate through which has issues. Some characters are clearly designed for certain positions and having to switch from rotate to stay every battle gets tedious. Ruin mode is a powerful tool but, it’s too easy to recharge it’s gauge in the second half of the game. At times it’s too powerful, and bosses can regularly fall before Ruin Mode ends.

The Nurture System(Skill system) is the predecessor of Blood of Calamity’s same system. Each of the six stats that can be improved unlocks specific skills but, the stat bonuses can quickly overcome your natural stats and unbalance the game. The best physical attack skill renders most bosses a joke, the final boss was taking 4-12 thousand damage a turn!

As stated by other reviews, shop prices are absurd and even higher than some of the dragon quest games. When you get your 4th party member, you can get the 2x money accessory but, at the same time you can also get accessories that triple HP and double MP which means difficulty goes out the window.

This dragon should stay dead

Takes a few hours to warm up, but still can’t compete with other games in the Kemco portfolio.

Music is awful, art and backgrounds are well done, but the character and enemy sprites look like crap.

Wild Arms 2 level of translation, yes really. Beneath all of the awkward engrish there are some interesting plot points in the second half.

Economy sucks as well. Prices are insane vs gold earned. Edit: There are accessories later in the game to negate this.

Tap controls are semi-bugged as well. There is a decent amount of gameplay here, but the first half is a bit of a slog.

I did become invested in the characters, and was glad to see most of them get closure during the ending.

Overall it was in the lower tier of Kemco games I’ve played. If you ever see it on sale and you’re hard up for a JRPG, than it will hit the spot, it’s just a bit rough around the edges.