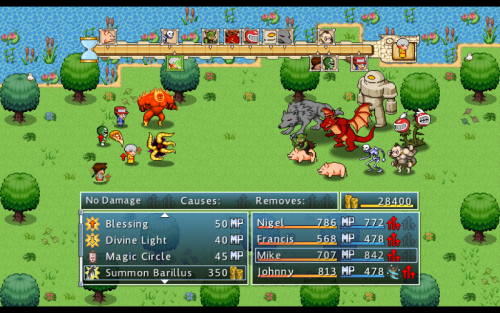 There are 2 reviews for 'Doom and Destiny Advanced'.

Far, Far away, in another Dimension..

The Four Horsemen of Apocalypse (from now onwards known as Nerds) are back (or not) for more Stories, Secrets and Souls (SSS rank in writing achieved) to bind using an Artifact from another Dimention.

Embark on a 101 (or more, but that’s my Final Final Final Speedrun time, try to beat it!) hour Journey through world filled with Chests, Easter Eggs and Sant.. Ninjas in Red! Nerds are too OP, please nerf them, Benjamin!

Each Nerd seems like any ordinary Nerd you have ever seen in the past, present, or future. But, Nerds Never Die.. except for the two times they did.. but Death likes them (and the game) too much and lets them get posessed by random Spirits that give them new fancy clothes and useful Powers to defeat some Aliens Ripley missed.

Meet (again) Francis, the best Ninja in the West; Johnny (Cage), who wants to become a Golz Millionaire and dpends free time farming on Golden Island; Mike (Tyson), who believes in Spaghetti God while digging out Jack Sparrow Treasures and Nigel, the Blue, whose Spirit is longer than Gandalf’s Beard and his Magic tricks enemies into an unfair fight.

Benjamin: Doom, I paid you to write a review, not tell random unfunny jokes about Mario’s Mushroom addiction! (Doom quickly notes one last sentence below, then vanishes)

Overall, Advanced Do&Don’t is a fun game that doesn’t exist yet, but once it’s out, it’ll be fantastic!

First of all, it’s important to know that time-wise, D&D Advanced happens before the first D&D. One character can prove this in Post-Game Scenario
.
This Time the story starts almost the same at benjamim’s Cellar. But now it was merged with another dimension, while our 4 heroes were exploring, they met with a egomaniac man called “Solomon Steel” which use his minion to steal the vital force of our heroes and creates dead-dark versions of our heroes as servants. In Spirit realm, the 4 heroes join with heroic spirits to get temporary bodies and powers in order to defeat solomon steel, get their bodies back and have a great adventure by the bless of the FSM.