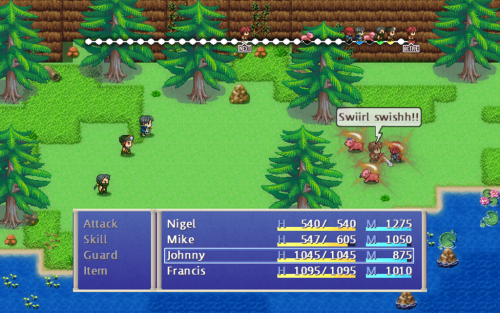 There are 3 reviews for 'Doom and Destiny'.

A hilarious parody of RPGs and gamers

Doom and Destiny is a turn-based, parody-driven RPG. This review is for the Xbox 360 version.

The main reason to play Doom and Destiny is that it’s laugh-out-loud funny. Four nerdy heroes go on a fourth-wall breaking escapade through fantasy and gaming satires galore. The jokes, puns, and general mayhem never let up. There are parodies of Super Mario Bros., Final Fantasy, Legend of Zelda, and… Japanese tentacle monsters?

(Don’t worry, the Japanese tentacle monsters are heavily pixelated… if Doom and Destiny were ESRB rated, it probably wouldn’t get worse than a T rating. Probably.)

The gameplay uses a standard turn-based, JRPG-style battle system. Skill points must be allocated carefully, because their distribution is permanent; if they player messes up, their only recourse is to reload an earlier save or lower the game’s difficulty.

Doom and Destiny has three levels of difficulty, and difficulty can be changed anytime out of combat. Easy is a cakewalk, and Normal isn’t much tougher, but Hard is merciless – you have been warned.

I highly recommend Doom and Destiny to any gamer who enjoys a good laugh.