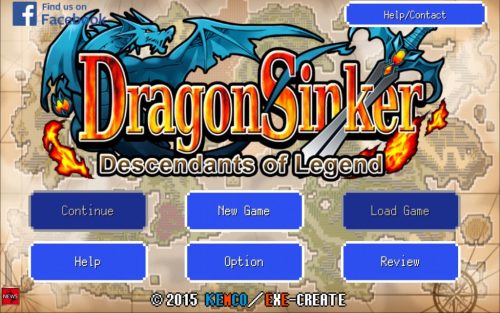 There are 4 reviews for 'Dragon Sinker'.

As a major fan of old-school Jrpgs (Nes & Snes era) I have to say.. this game is great, it has such a ‘Dragon Quest/Warrior’ feel to it but with MUCH MORE additional things.

Gameplay:
The gameplay is great, plenty to do within the game as you do main content, like side quests, item hunting, character/team building, hidden dungeons, etc. The music is okay but not that many tracks as far as I can tell and none that really stand out as masterpieces.

Controls:
The controls for STEAM (PC) is slightly confusing at first if you use keyboard and mouse, luckily the game has controller support which makes things a hell of a lot easier. Navigating menus is easy and not complicated.

Story:
SPOILER ALERT* You play as a Human Prince trying to collect Legendary weapons to kill some evil dragon, the only problem is that you need an Elf and Dwarf to help also, so you must try and gain trust of these other races at the same time. Your journey allows you to travel and recruit Followers like a cult member where the Human, Dward and Elf are the race leaders.

Battle System:
The battle system is easy to use and to get used to, its not complicated at all.

Skill System:
There’s plenty of skills that each Class Job has to learn with each job having its own special team effect once mastered, but is active always if you don’t change the job or once you hit rank 10. Sound effects for skills are great and look cool. The most useful of the Class Jobs in my personal opinion are the Priest, Villager, and Bard as their skills are just amazing and very much needed to survive, other than the thief job which is primarily used to steal items of monsters for stock value and easy Item/Gold gain.

Over All:
IF there was options to full screen the game, zoom the game out a little so it don’t look so zoomed in then I would probably class this game as near perfect for a mobile game. It certainly looks and feels like a Dragon Quest/Warrior clone but that’s a good thing, the graphics suits its setting and story which are both well designed and written. Should you play this game? yes you should, especially if you’re an old-school Jrpg fan. If you don’t like micro-transactions then I suggest you play one of the STEAM/PS4/NINTENDO version, other than that play the mobile version for on the go. 😀

One of the best

This game is really good! One of the few Kemco’s that didn’t get me tired after hours of gameplay. Interesting storyline, multiple endings, simple and nice gameplay. It’s totally worth your time, especially if you’re fan of Dragon Quest series!

What is wrong with this game? (in a bad way)

Honestly, there are lots of potential good things in this game. The job class, switching and learning new abilities. Very Final Fantasy 3/5 -like. One not-so-little-problem…:

So what does that actually mean? Well, if you attack with skills, you are literally hurting yourself WAY more than enemies are doing damage to you. Bosses? Don’t bother using skills, because your own skills will kill you first.

And MP usage is also by percentage (instead of fixed amount). Meaning, having high Max MP means ABSOLUTELY NOTHING.

Honestly, it’s bullsh*t. Ditch this game, because it’ll p*ss you off more than you get enjoyment out of it.

This game is the best

From a fellow JRPG can to the next, I can tell that you love the classic JRPGs like dragon quest and such.
Well if that’s the type of game you’re looking for, lookup further.
Dragon Sinker has stolen my heart from the day I first played it with its awesome story, great features, amazing classical retro graphics from the golden age of gaming, and an absolutely legendary soundtrack.
This game is truly captivating in every way.