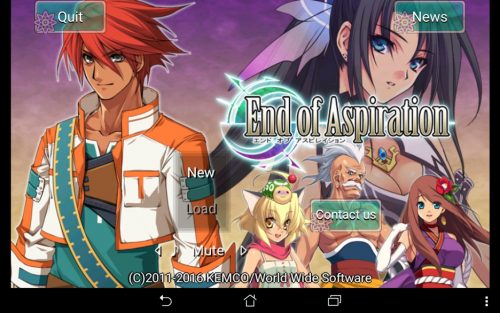 There are 3 reviews for 'End of Aspiration'.

This review is for the digital PSP version of this game titled “End of Serenity”. I have no reason to believe that the mobile version “End of Aspiration” is significantly different.

End of Serenity is very short (around 12 hours to finish everything other than cash shop dungeons), draws on all the traditional JRPG tropes, and has very basic turn-based combat. Its story is simple and almost entirely lacking in character development. There isn’t anything notable about its sprite-based graphics or its mediocre soundtrack.

So why play it at all? At its best, End of Serenity “JRPG comfort food”. The simple pleasures of exploring areas (none of the mazes are particularly labyrinthine, although a few have clever secrets or out-of-the-way treasures), battling random encounters, and watching a party of heroes grow into world-saving powerhouses are all here. Yes, I did genuinely enjoy my time with the game, even though calling it “mediocre” is being generous.

End of Serenity might be a more worthwhile game if its story and characters had more substance. There are five playable characters, who can be renamed at any time (from the in-game Tactics menu). Sadly, End of Serenity is so short, with so little text, that the player doesn’t get much chance to know any of its characters. The story is about fighting back against a criminal gang that’s controlling cities and abusing lost technology from an ancient civilization… and that’s it.

Yes, it’s a plot copied straight out of beat-em-up games like Final Fight or Streets of Rage.

The only tweaks to the turn-based battle system are that each party member can occasionally summon spirit beasts to perform super moves (these moves are overpowered early on, and mostly unneeded later on), and that each party member’s skill selection can be customized with purchased skills. There’s no real equipment customization (other than “buy the best stuff you can afford”), so deciding how to set up and use the party’s skills is about 90% of the game’s battle strategy.

The overall difficulty is quite easy. Level or money grinding is generally not required, assuming that the player isn’t escaping from most random encounters. An optional boss or two might pose a little more challenge.

There are two alternate, in-game ways to grind cash shop currency. One is through fishing (the first fishing spot is TERRIBLE for this; late game fishing holes are probably better), and the other is through beating a certain optional boss (who can be refought as often as desired) within a set number of turns.

End of Serenity is hard to recommend; there are too many better RPGs out there. It might still be worthwhile for someone who just wants to relax and chill with a very simple RPG.

One of their weakest efforts.

To be kind to this game, I don’t recall having any issue with the controls and there was at least potential for a good story in the early hours. To be honest about this game, it was an overall shoddy effort that barely even can be described as a “paint by numbers” RPG.

The story starts with a girl fighting against the Mafia (a gang of thugs which look more like Mad Max extras than classic mobsters) — what looks to eventually be a losing battle until the actual main character comes to help fight the good fight. The two of them (along with a third character) adventure for a bit before the scene shifts to two other characters. After a bit with them, you go back to the main guy and his two allies, who rescue the other duo and then…well, things conclude pretty quickly with the secondary villain being near-immediately dispatched, followed by your party handling a few quick dungeons before finishing off the Mafia boss and then, if a glutton for punishment, enduring the post-game content.

So, what’s wrong with this game? Dungeons are dull, often possessing long, winding passages simply to drive up the number of encounters you have to fight while walking from the entrance to the boss. The game is really easy, with little strategy needed to get past anything. There is a ton of content scattered over the world that only can be accessed via in-app purchases. While I read online that it’s possible to gain IAP points by catching fish in certain ponds, that didn’t work for me — I could catch fish, but never received any reward for doing so. Skills and spells aren’t earned, but are instead purchased at vending machines, with the only catch being that every character only has so many slots to equip them to.

Or, to put it briefly: Regardless of how crude and bland the graphics were in Symphony of Eternity, there was so much about that game that illustrated what World Wide Software was capable of doing. From the opening video to the voice-acting in combat to the class system, they showed they cared about the product they were making and, while it might not have been perfect, it was at least a labor of love. With End of Aspiration, they just seemed to be rushing a product onto the market regardless of how poor, unfinished or lazily-made it might come across as.

am i look like,a good reviewers