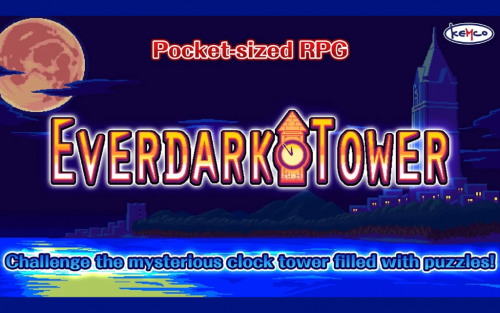 There is 1 review for 'Everdark Tower'.

This review is for the Nintendo Switch version of Everdark Tower. Its base price is $5; sometimes it goes on sale for less. It does not appear to have in-game purchases.

Everdark Tower is the second of Kemco/Hit-Point’s “Pocket-sized RPG” series. Its story is self-contained and completely independent from the story of the first “Pocket-sized RPG”, Archlion Saga, although its gameplay is very similar.

Also like Archlion Saga, Everdark Tower takes roughly two or three hours to finish. There is no significant optional or postgame content; the player just has the opportunity to replay the game with carried-over stuff. There is only one save file. Switch players might be able to work around this limitation by playing Everdark Tower on up to eight user IDs.

Like Archlion Saga, Everdark Tower features very streamlined and simplified turn-based RPG gameplay. The entire party’s HP is combined into a single total, and they get only one action per turn; the same is true of the enemy.

Battle skills are based on a cooldown system. Usually, a certain number of turns has to pass before a skill comes off cooldown and is available to use; some skills have other requirements to come off cooldown. Battle skills are learned automatically from leveling up, and Everdark Tower does not have any “magic point” or “skill point” system.

Items can be used in battle, and have a variety of effects. The biggest limit on buying battle items is the player’s budget, which must be managed carefully to avoid having to grind for gold.

Everdark Tower has a handful of very simple puzzles to solve, and random encounters. Grinding levels or money is possible but not particularly necessary… unless the player gets too careless. It’s worth noting that Everdark Tower is significantly more difficult than its predecessor Archlion Saga, even though both games are far easier than the default difficulty of a typical JRPG.

In Everdark Tower, equipment is important and failing to budget one’s money for it – or choosing not to use stars to open treasure chests that have equipment – makes the game substantially more difficult. Another issue is that items which can heal during battle are rare and not sold in stores. The only reliable way to heal in battle is with a spell that has a significant cooldown time…

…or by using a star. Stars are scattered throughout the game, and can allow the party to continue with a full heal if they fall in battle. Stars can also be used to increase experience or gain the contents of treasure chests. A few doors require stars to open and proceed the game. The player will not get softlocked behind a star-locked door unless they are extremely spendthrift with their stars.

The story of Everdark Tower is quite simple. The game is so short that there isn’t much time to get to know the characters very well. The narrative is mostly bog-standard heroism with a slight dash of existential philosophy thrown in. An irritating aspect of the subpar English localization is that pretty much everyone says “gonna” or “wanna”, like slang-talking teenagers.

Everdark Tower is so short that it’s very hard to recommend, but it does live up to extremely humble aspirations. There is even a very modest amount of challenge to be had, if the player deliberately refrains from using stars except as needed to open doors. There are worse ways to spend a couple hours in the afternoon, if one doesn’t mind parting with $5.