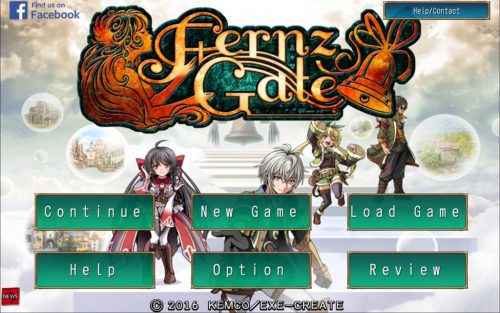 There are 6 reviews for 'Fernz Gate'.

This review is for the Sony Playstation 4 version of Fernz Gate. While the PS4 version has a steep base price of $15 in the US, this price includes all the bonus dungeons that are in-app purchases on the mobile version. The PS4 version also lets the player grind an in-game currency to purchase powerful or even game-breaking items from a shop; I assume this shop is a cash shop on the mobile version.

The PS4 version does offer paid DLC. All the paid DLC does is increase the rate of acquired skill points, skill level, experience points, or damage dealt. Paid DLC is absolutely not required for anything. At most, the PS4 paid DLC could reduce time spent grinding, and Fernz Gate is not inherently a grind-heavy game..

The story of Fernz Gate is solidly average, with highly predictable plot twists, but the main characters are appealing enough to give the story a 4 out of 5 star rating. Fernz Gate has an isekai (“another world”) story – the main protagonist Alex is an ordinary high school student who unexpectedly arrives in the fantastic world of Fernz Gate. Alex is one of many travelers from a wide variety of other worlds.

At the time of Alex’s arrival, Fernz Gate is in crisis because another recent arrival has dethroned the resident Goddess, declared himself Overlord, and callously perpetrated massacres against innocent people. Travelers from other worlds have organized a loose-knit resistance against the Overlord; Alex decides that he wants to help, despite his complete lack of combat experience. The struggle for the fate of Fernz Gate escalates from there.

The quality of Fernz Gate’s battle system makes it exceptional among Kemco RPGs, and worthy of comparison with the best full-priced RPGs. Anyone familiar with RPGs by Exe-Create will recognize the fundamentals of the turn-based battle system – battle statistics are very important, especially speed, which strongly affects how soon a character’s next turn comes.

Fernz Gate is notable in that it doesn’t have a “magic point” system for rationing its skills; instead, it has a cooldown system. This forces the player to rotate and level up different skills. On the higher difficulties, damage-dealing skills hit like a wet noodle unless they’re leveled up with repeated use. However, critically important skills that buff the party or debuff the enemy do not have to be leveled up, so even if a party member’s hard-hitting damage skills are on cooldown, there are potentially other valuable actions they can take.

There are many options for customization. Even though Fernz Gate has four main characters, these characters are arranged into three two-person teams, with the two extra slots filled by “Buddy” characters recruited as the game progresses. Buddies level up mostly by being sent on real time-gated missions outside of combat or the use of consumable rings; buddies level up very slowly from combat alone.

The myriad of customization and strategic options Fernz Gate offers may seem almost overwhelming at first – who should learn what elemental magic? Should a character dedicate themselves to damage skills or support skills? How should the (very plentiful) stat-boosting items be distributed? When should a character’s super move gauge be used for maximum effect? And this isn’t even getting into powerful unison special moves, which require both members of a team to use specific spells for a stronger overall effect.

Fernz Gate has four difficulty levels, which can be changed at any time outside of combat. Easy and Normal make enemies so weak that the player can do just about anything and win. Hard difficulty has a very nice balance of challenge without any required grinding – playing the entire game on Hard with the encounter rate set to one-half is quite doable. Very Hard difficulty exists for those who wish to test themselves and push the battle system to its limit.

For those who really want to push themselves, there are a plethora of optional challenges. An arena with level-dependent prizes for passing specific challenges exists (if the player level grinds too much, then they won’t get the special prize, although the missable prizes are never anything unique). After the player completes the postgame story, there is additional postgame content which encourages the player to explore highly challenging bonus areas, grind up to level 999, and fight powerful superbosses.

One final, welcome note about Fernz Gate’s battle system is that it gives the player a lot of control over random encounter rates. Each dungeon has an item that lets the player decrease or increase the encounter rate upon entering (the lowest rate is one-half the normal rate), or even spawn instant encounters. Reaching the end of the dungeon adds the option of turning encounters within that dungeon completely off.

Fernz Gate is the Kemco RPG that I would recommend to people who have never played a Kemco RPG before. The battle system is just that good. It was an absolute blast to play on Hard. I was tempted to replay the whole game on Very Hard just for fun, and I probably would if I didn’t have so many other games in my backlog.

Fernz Gate was my very first Kemco game I played a few years back and It didn’t disappoint me at all, I was drawn to the game and I played It a lot, Then I wondered what other games Kemco made and They have a lot of games, But Anyways this Is a Fernz Gate review not the entirety of Kemco’s games review, The game Is actually enjoyable and has a Colorful cast of characters Like Alex, Lita, Maidame Curie Etc,. The game Isn’t overly challenging Except of course On the harder difficulties but If your a casual game player, A playthrough On Normal or easy will Actually be fun and Not overly challenging at all, I really like the Skill system and gameplay too, the Magic Is Overpowered sometimes, Mostly more powerful then the character Unique skills (that’s why I didn’t use magic much cause I wanted a slightly harder challenge) and that’s all I got for ya, You can play It If ya want and this Review Is years late of this game’s release but Idc about that This game Is great- Anyways, This Is Luna reporting out-

Fernz Gate features a somewhat interesting story. While the main plot is a generic “overthrow the evil guys”-type plot, it does possess an interesting subplot as the main characters attempt to figure out what happened to them immediately before they arrived in Fernland. Another good aspect of the story is the protagonists; they possess depth and have varied personalities. Furthermore, they do not simply fit generic molds. Unfortunately, the same cannot be said for the story’s antagonists.

From a mechanics standpoint, the game is different from most in that there is no magic bar or similar resource. Instead, every skill and spell possess a cooldown time. This prevents players from spamming the same (potentially overpowered) skill or spell over and over again, which is a good thing from a design standpoint.

The balance of the game is okay, but it suffers from a few flaws. First, some skills and spells are clearly overpowered for their given cooldown time, and this is exacerbated by the ability to reduce cooldown time. Second, since HP is restored after every battle, and there are no mana points to manage, it is easy to auto non-boss battles, even on expert difficulty.

Overall, Fernz Gate is a good game, but it is somewhat pricey.

======== Considerations About This Review
I’m better finding points to improve, than points to praise.
So assuming that anything I’m not criticizing is probably worth praise is acceptable.

======== First Impression
This was too long ago. The game seemed fine, although I was a little weary with the story.
The commander wrote me the following advise letter: “If you enjoyed Asdivine Menace, Cross, and/or Antiquia Lost, I think you’ll like this one. In fact it may be the best Kemco release since Asdivine Cross.”

======== Comments After Playing
The battle mechanics are pretty much the same from Asdivine Hearts II, except for the Rubrix (or whatever it was called) – Fernz Gate is back to the 2+1 rings. If you absolutely hated the team system, you may not stand this game (although Auto is very effective most of times).

There is a new monster type, too. If I were to complain I would say something about I defeating the True End Boss in two hits… And how useless were the physical skills?
Well, although I rarely (almost never) used physical skills, and because my OP magic I didn’t used BGS either.

The game is great no matter how I try to look at it. I’ll write “They actually put effort into this game” as a Pro point, because you can’t compare this title with, say, Asdivine Hearts 2. The game is much better in every aspect.

======== Rating Summary
Gameplay is decent (Although I crit! so often with magic skills, I totally forgot what metal monsters are), Controls are intuitive and there is no hindrance (eg. 200 taps to save, or things at “odd” places), Story is neatly done (and I laughed a little at points – well written!), there were some minor, meaningless typos you most probably won’t find while playing (unless you are actively seeking for them).

Magic skills can get overpowered quite easily, specially the unisons. After thinking deeply and comparing with Asdivine Cross, I really must give only 4 stars for skills.

The buddy/team system seems to have taken quite some time to craft, and in my opinion is a good system. (Although I still prefer games without it, I do prefer this system over having members outside my party)
Only thing I hate about it is that only the sub may use items.

======== Monetary Worth
I did bought the premium version for the standard price, and have absolutely no regrets.
Unless any of the points I wrote really despise you, this game is worth its price.

Fernz Gate is definitely one of Kemco’s better games. Anyone who’s played the Asdivine series will feel right at home with the controls and battle system, and yet the story is unique and original (and for once, NOT at all cheesy… don’t get me wrong, I like the cheese in Asdivine, but it’s refreshing to see an absence of cheese in this game).

The main characters come to Fernz Gate from “other worlds,” and must defeat the Overlord in order to return back home. The story, and the dialogue, are top notch, and while you can usually “Auto” battle the random encounters, the bosses in late stages do present a good challenge.

The game has a Normal End and a True End (True End adds about 1.5 hours), and another 6-8 hours of really cool bonus material grinding in various dungeons.