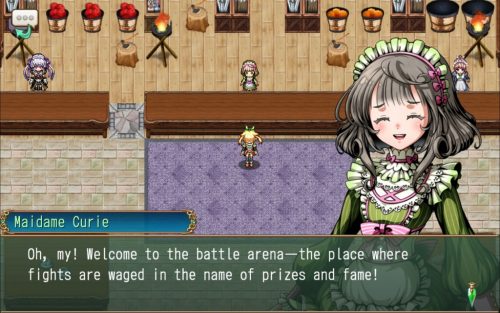 Once you've been to the Maid Co-Op in Rizolt City, you can participate in the co-op's battle arena.

(Just talk to Maidame Curie at the main desk.)

The battle arena is completely optional, and has no impact at all on the story.

Inside the arena, you can fight against different enemies to win prizes.

The arena is split up into four different "Cups": Bronze, Silver, Gold, and "secret" (aka Maid Cup, which won't even appear as an option until you've completed Gold).

Each cup has three levels; Easy, Normal, and Hard; and each level has three rounds.

Every time you win a round, you get a number of Maid Coins which can be used in the coin exchange.

Winning all three rounds on Bronze (Easy) nets you a prize for that level, and also unlocks the next level - in this case, Bronze (Normal).

You must clear the Bronze (Hard) Cup in order to unlock the Silver (Easy) Cup, and so on for all four cups. 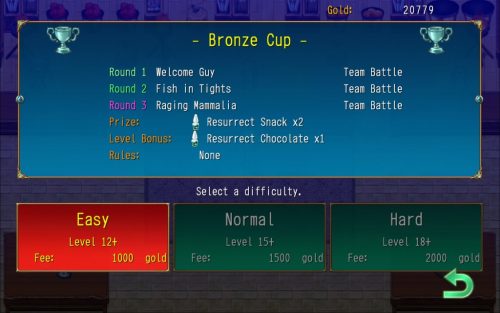 Additionally, each level has a "Level Bonus," which is awarded if you can win within a maximum "party level" for that cup.

For example, the Bronze (Easy) Cup is recommended for parties that are Level 12+ (meaning, you should be at least Level 12 before attempting that cup).

Now, as long as you are no more than 5 levels above the recommendation (in this case, you'd have to be Level 17 or lower), you can win the Level Bonus.

(Parties that are 6 or more levels above the recommendation do not get the Level Bonus.)

Aside from the Level Bonus, you can repeat any cup in the arena as many times as you want, and receive the rewards for that level.

The coin exchange is to the right of the main desk. Here, you can... you guessed it... exchange your coins...

The coin exchange has some items that you can't find anywhere else; some of which will be extremely useful in the game.