This guide is for casual players, who don't want to experiment a whole lot with changing teams or figuring out all the "best" combinations of team members. 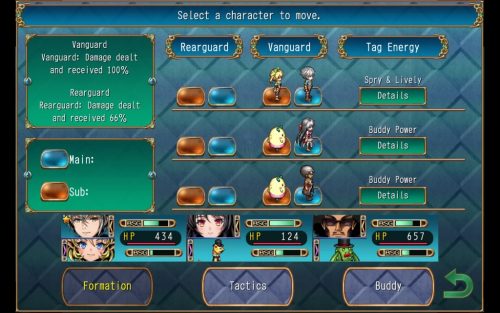 The initial team formation: Alex and Toril, Lita and Baron, and Kodan and Sir Cactus.

When you first separate into teams, the game automatically pairs Alex with Toril, and Kodan and Lita each with a buddy.

More specifically, Alex and Toril make up the first team, with Alex in the main position and Toril in sub.

Lita and Baron make up the second team, with Lita in the main position and Baron in sub.

Note that each team is in the Vanguard Position.

In Vanguard the damage dealt and received is 100%; while if you move a team to the Rearguard, it's reduced to 66%.

I kept all 3 teams in the Vanguard for the entire game.

With this setup, you'll want Alex and Toril to learn all 3 magic types, so that they can use the game's most powerful unisons. To do this, go to the Equipment menu, and unlock Alex and Toril's 3rd accessory slot. (Note: this will cost you 100 gems each, or a total of 200.)

Now, equip both Alex and Toril with 1 Fire Ring B, 1 Water Ring B, and 1 Earth Ring B. This will let each of them learn all 3 magic types, all the way to level 50.

As you come across Fire, Water, or Earth Rings 'a', swap these out so that Alex and Toril can learn all magic to level 99.

As their magic levels increase, Alex and Toril will be able to use more powerful unisons, which, in Boss Battles, will often be much stronger than their skills.

(Of course, once they run out of available unisons, you'll be limited to regular magic, or skills - but the unisons are strong enough you'll want to learn them all.)

For the most part, you'll now be using Lita and Kodan's Brave Strikes, followed by either skills or whatever magic they may possess.

For most of the game, Lita and Kodan's Brave Strikes will be a good first choice in battle. However, make sure you use Alex's Brave Strike before theirs, so that there parameters will all be +2.

You'll also want to use these two teams for support - using healing or recovery items, or occasionally using a Brave Cookie or similar item to quickly re-fill everybody's brave gauge.

You do not need to unlock Lita or Kodan's 3rd accessory slots. In fact, if you play the game on Normal difficulty, you don't even really have to think about what rings to give these two members.

On my first play through, I kept Baron and Sir Cactus all the way to the True End, and I rarely used them for anything other than support, or recovery items.

So, you can keep these two buddies and still finish the game; however, a lot of the buddies you'll acquire throughout the game will have different skill sets or offer better bonuses, so it's worth checking out every buddy you get.

On Normal difficulty, it really doesn't matter which weapons you use.

My only recommendation here is to upgrade everyone's armor each time you come to a new town or village, and to periodically go to Menu->Equipment, and tap on "Party Strongest" to make sure that everyone has the strongest equipment available.

(Of course, if you prefer, you can equip their weapons based on the weapon effects, but again it's really not essential in this game.)