Enter the cave, and Toril uses the Poison Thinner to dispel the gas.

Ultimately, you want to take the exit all the way to the north, so go ahead and explore everything else first, and get all the treasure. The exit in the southern part of the mini map leads to another area where you need Toril's Skill Level, but you'll be able to access this one right away.

As you approach the northern end, you come to a spot with ice on the floor. As explained in the dialogue, when you step on ice you "slide" across the entire patch, in the same direction you were originally facing, either until you run out of ice or you run into a wall.

To get across to the right side of the ice patch, first step on the tile that's immediately next to the long row of down arrows. Now take one step to the right, then one step onto the ice, and you'll get stopped in front of the rock. Now step to the right (your right, not the party's right) and run into the wall, then step to the south to reach the arrow tile pointing to the right.

To get back across, step on any of the arrow tiles pointing to the left, the step on the tile immediately next to the long row of down arrows. Then just walk north and you're free of the ice.

On the next screen, there's a new Curio, meaning if you want to change the encounter rate here, you'll have to touch that Curio first. Again, you want to take the exit to the north, but the path through this screen is a little trickier. Just pay attention to where you are on the mini map, and you should be fine.

On the top half of this screen, there's an area that requires Kodan's Skill Level. You'll be able to access this one if you've made the right "Free Time" decisions up to this point.

Talk to the Male Mage in the northeast corner of this screen to learn the shared skill "Impossible." Then get the remaining treasure and take the exit in the northwest to get to the boss. 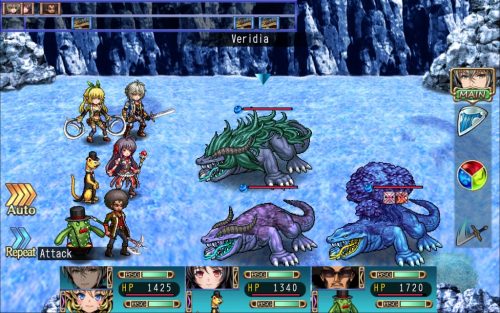 This is a great battle for Brave Strikes, if you've got them available.

Use Super Boost and What's yours is mine!, then on Lita's turn use Shock Absorber.

Follow that up with Kodan's Pulverize, then your shared skills.

If that doesn't kill them all, then just use unisons and attack skills.

After the battle, Marle gets a message that Pangie is being held in Loftus Tower.

After some deliberation, the party decides to go rescue her... so, your next destination is Loftus Tower - but first, go back to Mosso Village to report on Subquest 07 and unlock Subquest 08.