Tip: If you go to Menu->Tactics->Tactics and set the Collective Settings to "Onslaught," you can Auto your way through most random encounters, and your party will still use skills and magic and earn EXP for those skills.(Of course, the skills they use will be completely random, so if you want to raise a specific skill level, then Auto isn't the best way to go.) 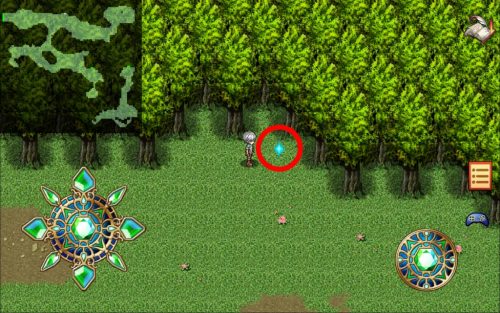 Look for the 3 blue shining stars to complete your quest and gather all 3 Big Leaves.

You need to find the 3 Big Leaves for Tifah, right? Well they're scattered about through the woods, but each one will appear on the screen as a shining blue star.

The first one is just north of the "southern pass" that you previously could not access.

The second one is about halfway between the first one, and the space where Alex and Lita first appeared.

And, the third one is in the top left corner of the space you first appeared.

Now, before you go back to Kalma Village, check your subquests and see if you've killed enough Slimes to complete Subquest 03. (You probably have.)

Back at the village, talk to Kanbia to get your reward for Subquest 03 (2 Crowbars, YAY! Not.) Anyway, after that, there's another new arrival, and Alex and Lita volunteer to go look for this new person in, you guessed it... Cradul Woods.

Just then, a Guy with an Afro shows up and joins your party (seriously, that's what they call him when you first meet! But then you learn his name is Kodan.) Anyway, Kodan joins your team, and then you get control back and can go report your quest results to Tifah for Subquest 02.

Now, it's back to explore the rest of Cradul Woods (and find some treasure!)

Back in the Woods

Go through the south pass and all the way to the west, until you see a girl with a light bulb over her head. Listen to her explanation about treasure chests and she'll give you 5 Cure Snacks. Then, open the treasure and go explore the rest of Cradul Woods.

In the southeast section, there's an entrance to a cavern leading to the far end of the woods. Go through the cavern and listen to the bit about how to spot secret passages (and get that treasure), then exit the far end and head south to find the new arrival.

Note: When you "check to see if he's alright," it'll also prompt the game's first Boss Battle, but this battle should not present any problems. 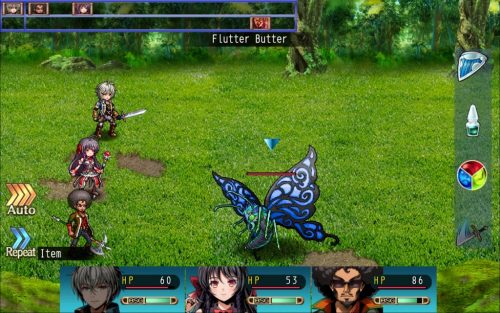 This is an easy battle, so use whatever skills or magic you want (or use everyone's Brave Strike and be done with it in one turn...)

After the battle, you meet Altore, who does not join your party, but does become a major NPC over the course of the game.

After the dialogue, go back to the far end of Cradul Woods to get the remaining treasure, then return to Kalma Village.

Kodan says he's headed to Rizolt City, which is just beyond Stelumbra Cave, and he invites Alex and Lita to come with him.

So now, you get to go to Stelumbra Cave.

During the last bit of dialogue, you got a Magic Tablet which unlocks the "Secret House." Now if you go to Menu->Secret House, you can click on the first empty room and "convert it" into a Planter.

Now, plant one of the Seeds you got from the earlier Subquests (you should have 1 VIT Seed and 1 HP Seed; you can plant either one).

Let the timer run out, and then you can come back to the Secret House and "harvest" a Fruit, which is a much more potent version of the Seed. (For example, a VIT Seed raises VIT by 1, while a VIT Fruit raises VIT by 2-6.)

As the game progresses you'll also be able to turn your empty rooms into either a "Stand" or a "Door," and I'll explain those two when they become available.