Compared to other dungeons, the Dragon's Den is actually pretty easy.

On the first screen, you'll come to a place in the northwest corner where you need to fix an old boat to sail across the river. (And you also get to see Kodan's back story.)

In order to fix the boat, you need to find 2 Planks and a length of Rope. Backtrack through the beginning part of the dungeon to find all three.

Once you've fixed the boat, sail east to get to an island with treasure, then sail further east to get another treasure, and talk to the Male Outworlder on this island to learn the Shared Skill, "Flash Strike."

Now sail back to the west to get across the river.

Here, there's a pedestal that Lita needs to decipher. The puzzle says, "Left.. center... or right... Place your hand above one...?" Then you're given three choices: The left one, the center one, or the right one.

If you choose the center one, the center boulder disappears and you get an Octupler Ring.

If you choose the right one, you get 30 Maid Coins.

If you choose the left one, you get nothing.

Now all the way to the east, there's a spot where you need Kodan's Skill Level. Just south of that spot, there's a treasure. Now head west, and take the secret passage to another treasure, then exit to the second screen.

Once you've got that, collect the other treasure on this screen and then take the exit to the third screen.

Take the secret passage at the end of this screen to get the treasure, then come back and go north to meet the dragon. (And fight him; oh yay!) 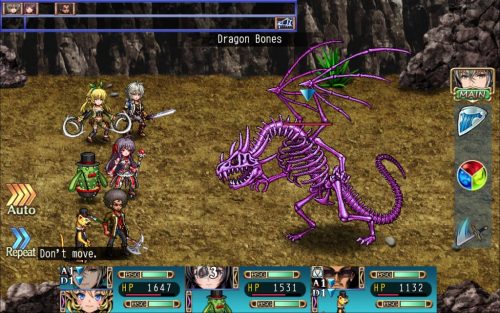 This is not an easy battle. (I think dragons fight dirty...)

Dragon Bones uses a nasty mix of Countdown, Grand Needle, and a really ugly skill called Rejection, which lowers the team's countdown to 1, making them die instantly on their next turn.

And if all that alone isn't enough to kill you, his Heavy Swing will probably do the trick.

My advice on this battle: Set the difficulty to Easy and just get 'er done.

Open with your Brave Strikes and Shared Skills, and then have Alex and Toril use unisons while Lita and Kodan use their attack skills.

Beyond that, be prepared to revive fallen teams if the battle goes on long enough.

After this battle, the dragon still refuses to help you - until he sees the truest vision of beauty he has ever beheld... And then, the dragon agrees to help you, any time his "love" calls for him. (What a sap...)

When you're ready, leave Dragon's Den and go back to Gastra Village.