The first screen of this dungeon is slightly annoying, because there are series of ledges all next to each other, so in order to traverse them all you have to do some circling back.

North of the first ladder, there are two secret passages, both leading to treasure. 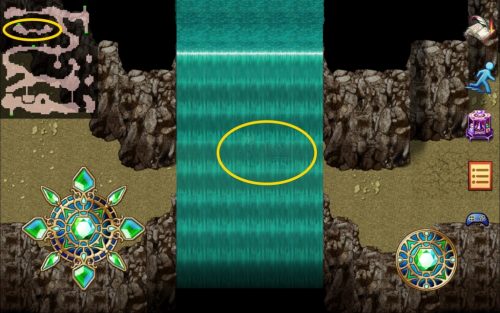 There's an exit behind this waterfall to another part of the dungeon.

In the middle of the screen, there's a "hidden" passage behind the waterfall.

It'll show up on the mini map as an exit, but you can't really see it that well through the water.

Anyway, take that path to a side room with an another waterfall, and behind this waterfall, there's a hidden treasure.

Go east of that to get one more treasure, then go back to the main part of the second screen.

Now get the rest of the treasure on this screen, then head to the northeast corner.

When you reach the Curio at the far end of this screen, there's a Boss Battle just beyond that point. 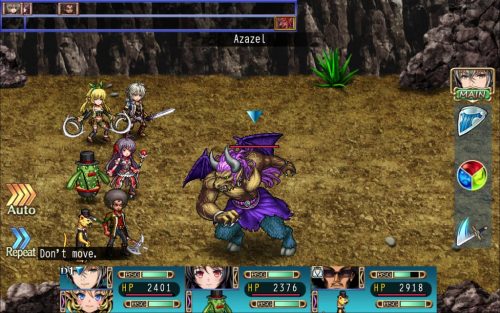 Again, I really recommend fighting this boss on Easy difficulty.

(In fact, I recommend fighting all future bosses on Easy.)

Open with your Brave Strikes and Shared Skills.

Watch Azazel closely, because he uses Hyper Armor, which makes all physical attacks only do 1 damage.

If he does that, your only choice is to have Alex and Toril use unisons, and Lita and Kodan use whatever magic they have available.

Also, watch out for his Truncate attack, as it will do massive amounts of damage to your entire party.

After this battle go north to the final room of the dungeon. All the missing dragons are there, and they all agree to join your cause! And you get the Revolus Chime, so it's a real win-win.

After the dialogue, get the treasure and exit Empyrea. Watch the awesome scenes that follow, then when it's all over, go to Variaht Town (which, of course, is in the Variaht Region).