Tiles with arrows on them will make your party move in the direction indicated.

This dungeon is a little tricky due to the new elements introduced here.

Go through the secret passage right at the entrance, then go forward for a short scene.

Afterwards, take a few steps forward for a dialogue about arrow tiles.

Basically, any time you see a floor tile with an arrow on it, stepping on that tile will move your party in the direction of the arrow.

(Later on, you'll be able to buy a Heavy Ring which will let you move freely on arrow tiles, but for now, there's no way to get around them.)

After this dialogue, head for the exit in the northwest. Along the way, you'll also learn that there are places where you can jump down a ledge to get from one part of the dungeon to another.

Now go north towards the exit, and you'll run into the first "Skill Level" area in a dungeon. This one is a pedestal with strange writing, and in order to go past this point, Lita's Skill Level must be high enough to decipher the writing. (Fortunately, this one opens up right away.)

Note: There will be two more areas in this dungeon that require a Skill Level - one for Kodan, and one for Alex. Since both of them are readily accessible, I won't make any particular note of them here.

Now, take the northwest exit, rescue the animal, and grab the treasure.

Now head back to the main room and go due east. There are two separate ledges over here, and you'll want to jump down both of them. Take the first one you come to, then circle back around to the other one in order to get both treasures.

Now go a little to the west, and jump down the first ledge you came to (the one that prompted the dialogue). Get the treasure here, then take the southwest exit (but first, take the secret passage to another treasure.) Rescue the animal, get the treasure, then go back to the main room.

Now go all the way to the north to rescue another animal (and get the treasure), then go back to the main room.

Now head for the southeast exit. Talk to the Female Archer near the exit to learn the shared skill, "Karate Chop." Then take the exit, rescue the animal, and get the treasure.

Back in the main room, head for the northeast exit. The boss battle will be at the end of this new screen.

Collect the treasure on this screen and watch the descriptions for Kodan's and Alex's Skill Levels, then head east toward the final area, and a Boss Battle. 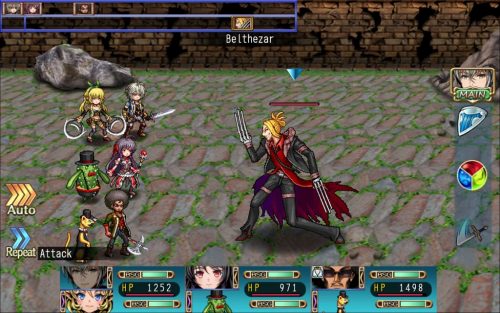 Belthezar can be somewhat nasty, but if you use everyone's Brave Strike on their first turn, you won't have any problems defeating this boss.

Watch the scene after the battle, and then use your final Rescue Pod to send the last animal back to safety.

Now, before you leave, take the path to the west to get the last treasure in this part of Hushet Ruins.

(If you use a Treasure Searcher at this point, the game will say there are 10 unopened treasure chests in this area - but those are in a part of the dungeon you don't have access to yet.)

Back to the Co-Op

Go back to Rizolt City, and talk to Maidame Curie in the Maid Co-Op. Your anima agrees to travel with your party now, and you get it to give it a new name. Then there's some kind of commotion outside, so leave the co-op and take a few steps to the south, and then watch the scene that unfolds.

Go to the inn, then when you have control of the party again, go back to the co-op. At the entrance, you run into Endrey, who asks if you can take on a task for the support squad to eliminate a monster in Breezan Valley. Now, head toward the town square for one last scene here before you can get on with the game...

Watch the dialogue with the Suspicious Man. Somehow, he convinces Lita, Toril, and Kodan to all compete in a cooking competition, and when they're done, Alex gets to choose whose dish he will eat.

It makes absolutely no difference which choice you make, except the dialogue is a little bit different for each one.

Once this scene ends, go a bit north to unlock Subquest 06, then leave town and head to Breezan Valley (which is in Variaht Region, on the World Map).