Here, you need to locate and rescue all of the prisoners. It'll take a little while, because in order to free the prisoners you need to find the key - and of course the key is practically all the way at the far end of the dungeon...

On the second screen, there's an area that requires Toril's Skill Level, that you won't be able to access just yet. There's also one empty jail cell, near the entrance to this screen, and one full jail cell near the exit.

The third screen has multiple jail cells, which also can't be opened without the key, and it also has a treasure that's behind arrow tiles (meaning you can't get to it unless you have a Heavy Ring.)

The fourth screen looks confusing at first, but it's really not that bad. Just go south of the entrance, then follow the path around to the northwest.

(There's an exit to the north along the top of this screen, but you can't get to it either, unless you have a Heavy Ring. Same with the one treasure in a passageway all by its lonesome... no Ring, no... well... treasure...)

When you get to the northwest corner, you find Pangie's cell, and she lets herself out (and then hands you the key, which she's had in her possession all along.) Then she asks you to rescue everyone else and to meet her outside when you're done.

So, just go through the dungeon backwards, and unlock all the doors.

After you unlock the fifth door, you meet up with Pangie and she asks you about joining the resistance, etc., and then says she'll see you all later. Then Lita realizes you still have another key... so now go back to the cell that was originally open when you first entered this screen.

It's not open now; in fact, inside that cell is a Boss Battle just waiting to happen. 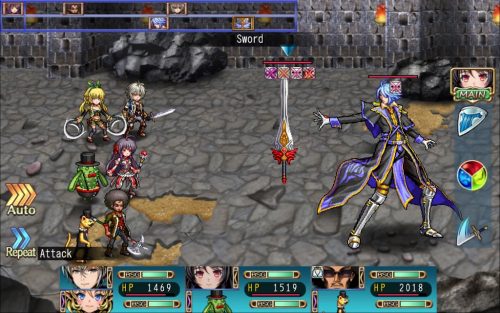 Any time you kill "Sword" in this battle, Stiletto will bring it back to life, so just ignore the Sword completely, and focus everything on Stiletto.

First, use your Brave Strikes.

Then have Alex and Toril use unisons, and Lita and Kodan use your shared skills or their respective attack skills.

After this battle, there's a scene where Alex remembers just a little bit about the moments before he arrived in Fernland, then Altore and Endrey show up and are about to question Stiletto, when...

Who walks in but the Overlord? Fortunately, you don't have to fight him at this point, but he is pretty ominous, nonetheless.

After he and Stiletto leave, Altore tells you that the resistance is collecting items that will allow them to lead an assault on the Overlord's Castle, and he invites Alex to join the resistance (but Alex politely declines).

Then, you find out that everyone has had some small portion of their memories returned to them, and the party wonders whether this isn't somehow the Overlord's doing?

Finally, Altore asks you to go to Gastra Village, to help search for survivors in Pheryl Town. Once all the dialogue ends, exit the tower. You can now go to Gastra Village, which on the World Map is located in the Gastra Region - but first, take a little sidetrack to unlock the next 2 subquests.