Watch the scene at the entrance, then go on to the first screen.

The exit you want (the one in the north) is currently blocked by a mana barrier, so you'll have to find a way to remove that before you can go further.

Take the exit in the southwest to get a treasure, then head up to the northwest for a Boss Battle. 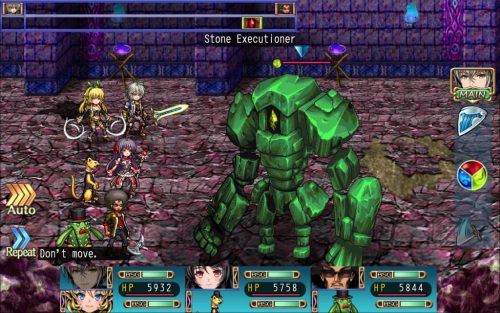 (Unless you have an abundance of Brave Cookies, in which case... go for it.)

Stone Executioner is an Earth-type, so Fire spells will do extra damage.

Use any Fire-based unisons you have (plus any other Fire spells).

Also, use your Shared Skills.

Even on Easy difficulty, this battle will take awhile, so just be patient and watch everyone's health.

After the battle, open the treasure and then go into the next room and flip the switch. Now the barrier has been weakened, but it's still not gone yet. 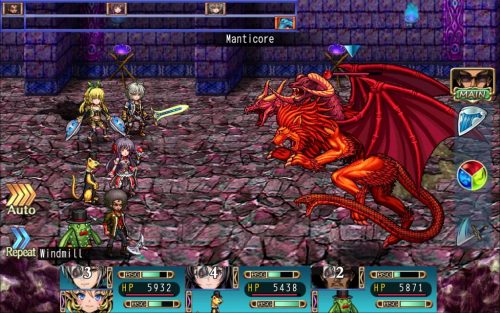 Manticore casts Countdown on all your teams on the first turn of battle, so if you've got your Brave Strikes this would be a good time to use them.

Watch everyone's countdown and be ready to revive your fallen teams immediately.

Manticore is Fire-based, so use whatever Water spells or unisons you have.

If you're lucky (and if you're on Easy difficulty), you'll be able to defeat Manticore before anybody's countdown reaches zero.

Anyway, after this battle, open the treasures and go north to flip the second switch and remove the mana barrier.

Now go back, and take the exit to the second screen (and another Boss Battle). 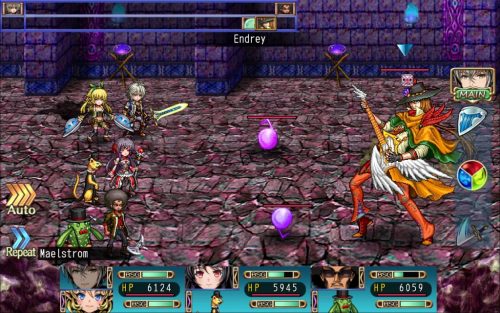 Just like the last time, if you kill Treble and Bass before you kill Endrey, he'll just revive them.

So focus all your attackes on Endrey, and use all the strongest stuff you've got.

If you have any Brave Strikes available, use them first.

Endrey may cause one or more of your teams to go berserk, in which case you'll either have to cure them, or wait for it wear off.

Either way, this really is not a difficult battle; it just takes awhile to win.

After this battle, go on to the third screen.

There's a spot here that requires Kodan's Skill Level - and to access this one you'll need his level to be at least 90. (Which it won't be unless you've used an item to raise it.)

(On the east side of this room, there's treasure behind arrow tiles, that you can't get to unless you have a Heavy Ring.)

On the fourth screen, get the treasure, and then take the exit in the northwest to the final Boss Battle. 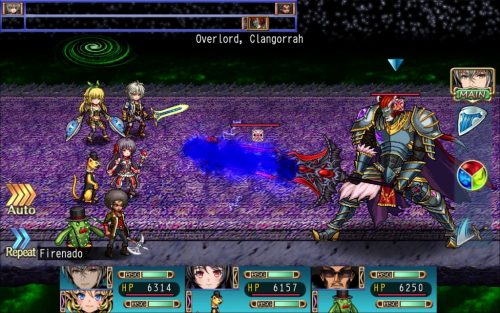 At this point it should go without saying, but...

Open with your Brave Strikes and your Shared Skills.

If you're lucky, Pulverize and Shock Absorber will kill the Sword and take the Overlord down to about half his health.

Now you have a choice:

If you want to cheese the battle, then have your next team use a Brave Cookie on Lita, and let her use Shock Absorber a second time.

Then repeat the process a third time, and the Overlord should be dead.

Or, you can actually use your skills and unisons, etc., and draw the battle out for a really long time.

Either way, after you defeat the Overlord there's a few scenes and then the credits roll.

After the credits, you'll be prompted to save your data, and then when you reload you can access the additional game content (including bonus dungeons, additional subquests, and a "True" End.)

To access all this, simply save your game, then return to the Title screen and tap "Continue." This will load your game right before the battle with the Overlord, and will load the new final chapter.