Pheryl Town - is it a town, or a dungeon? Possibly both!

(No, but seriously. Because Pheryl Town was recently sacked, you will run into monsters here. So, let's call it a dungeon.)

So, the first screen has a busted up building, a storehouse, and a couple of survivors over on the west side. Approach the survivors and warp them to Rizolt City (and get the Town Key... and get the treasure that's right there.)

Now, there are two exits to the north and one to the east. Take the north exits first, and get the treasure and rescue the survivors (and get their Town Key, and the nearby treasure), then come back and take the exit to the east.

Get the treasure on this screen, and then enter the beat-up building. Inside, there are two locked doors (but you can open them both as long as you have both Town Keys).

The door on the left leads to a really ridiculous secret passage, which will lead to the treasure on the west side of the building. The door on the right leads to stairs to the next screen.

There are more survivors on this screen, and there's an area that looks like it requires Lita's Skill Level, but is actually a part of the story (so I'm assuming that everyone just goes right through?)

At the south end of this screen, there's an exit that leads back up to a small room. Here, the party decides to rest for a minute before pressing on, and there's a short scene with Alex and Lita.

When the dialogue ends, exit this room to the final area (and, ultimately, another Boss Battle).

Get the treasure here and rescue the last survivor, and then head for the far end of town.

The Rebel Swordsman leading the evacuation comes to thank everybody, and then Belthezar comes on the scene... Monsters appear and people start to die... and somehow...

And while the other parties take care of the monster, Alex and company get to face off against Belthezar. 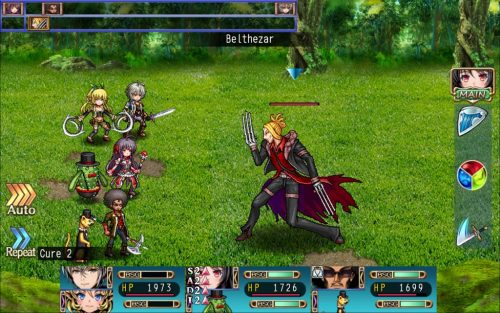 This battle can get nasty, if Belthezar happens to get enough turns back to back.

Open with your Brave Strikes, and then go straight to unisons and attack skills.

Now be ready to revive any team that dies, and keep everyone else close to full health.

Belthezar is particularly nasty, so if you have any Brave Cookies, you may want to use one in this battle.

A Brave Cookie will max out one team's brave gauge, so if you get the chance, I recommend having Toril use a Brave Cookie on Lita, then on Lita's next turn, use Shock Absorber for a second time.

This should be enough to kill Belthezar, but if not, he'll at least be very close to death.

After the battle, Belthezar runs away, and Alex announces that he's ready to join the resistance.

Once the dialogue ends, go west to get the last treasure here, then leave Pheryl Town and go to Rizolt City.