When you enter Rizolt City, you find out there's a meeting planned for the following day to discuss how to defeat the Overlord. When the dialogue ends, go to the inn, and you'll have your first "free time." 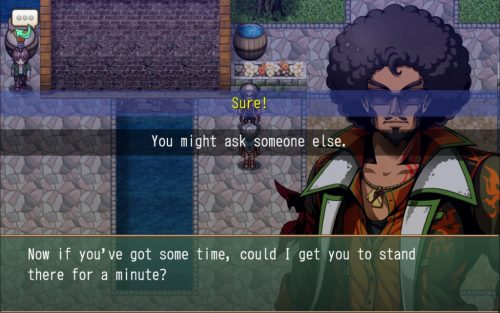 Each party member in Fernz Gate has a specific skill that, up to this point, you haven't had to worry about.

(Each person's skill is listed on their Status screen under "Skill Level.")

Throughout the game, there are areas in dungeons where one of the members will need to use their specific skill to access a special part of the dungeon.

(Basically, somewhere that has awesome treasure that, if your skill level isn't high enough, you can't get.)

"Free Time" is an opportunity for Alex to interact with the other party members and raise their "Skill Level."

Free time events are rare and far between, so you'll want to make sure that your interactions yield the best possible results.

To raise each member's skill level, you need to a.) locate that member inside the town, and b.) answer their question correctly.

Here are the correct answers for Rizolt City:

In the morning, go to the town square. At the meeting, you run into Altore, and you also meet Pangie and Endrey (two other important NPCs; although Endrey is kind of a strange one.)

(Shared skills are skills that can only be learned from other NPCs, but can be used by any party member at any time. Note that once a shared skill is used in battle, the Cool Time for that skill applies to all party members, meaning no one can use it again until the Cool Time is done counting down.)

Once all this dialogue finally ends, it's off to the Maid Co-Op for, well, MORE dialogue!

At the Maid Co-Op, you meet Maidame and Jolie Curie, and Maidame Curie gives your party an anima - a strange animal capable of communicating with others of its kind across vast distances. But, because the number of animas in the world is quite small, Maidame Curie says she has a task for your party to perform before you can have one. The task? Rescue animals from nearby Hushet Ruins.

After this, Maidame Curie takes your Magic Tablet and adds to it the ability to dispatch buddies. (Basically, you can put a buddy in your Secret House, and in 3 hours you can collect a number of Maid Coins. Maid Coins are used to buy special items in the Coin Exchange inside the Co-Op.)

Once this dialogue is over, you can talk to Maidame Curie again and, if you want, you can start participating in arena battles. (More details about the arena can be found here.)

As you're leaving the co-op, Jolie Curie rushes out and tells you about a place called Logus Laboratory, and asks you to visit her there if you ever get the chance.

Your next destination is Hushet Ruins, but before you go there, you should explore Rizolt City and collect the treasures and talk to all the people with light bulbs over their heads.

* There's also treasure in the basement of the co-op, but you can't get to it without first having the correct number of Crystals. (Which you won't have at this point in the game, so don't worry about it for now. We will get that treasure later.)