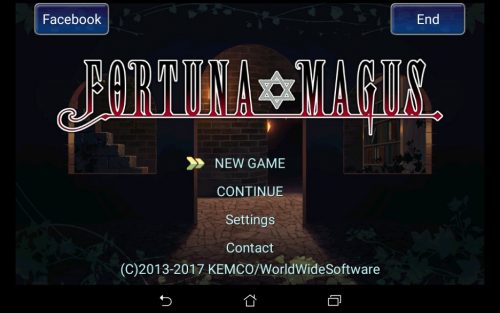 There are 2 reviews for 'Fortuna Magus'.

======== Considerations About This Review
I absolutely love this game. Expect it to be more partial than usual, but I kept the “4 stars as default” rule as my other reviews.
A bit sad it is short.

======== First Impression
This was too long ago and I have absolutely no idea.
I only remember I played this one after Silver Nornir and I knew the combat was similar.

The revelations are a nice addition and the skills are diverse. I also liked the magestones concept, well implemented. 5/5

Battle screen has a bit too many buttons but I found the interface rather easy to use, in overall. The gamepad can’t be adjusted as freely as other games, but the default settings are good enough. The items are on a list which can be a bit bothersome to scroll. 4/5 ─ did not outdid itself, has no usability issues but could be better.

Gameplay ─ Heh. 5/5, naturally. I also liked the sidequests, the maps aren’t bland and even if the dungeons are of a simple design, they’re well made. There’s also a minimap. No issues grinding, which is probably optional anyway. Multiple difficulty settings. Really, what else could I ask? They did perfectly fine.

======== Comments After Playing
Played both normal and true end. Also liked how to achieve true end, you need to be innovative in combat, instead of just “complete normal end then fight again and pick a different option” or “do New Game+”.

A pity the game was too short, but maybe it would get a worse score if it overstayed its welcome.

======== Monetary Worth
I like this game very much, but it is on the short side. In my opinion this is good and worth more than a LOT of other Kemco games.

The game has a good story, albeit somewhat on the short side. The battle and skill system are somewhat unique, in that you “learn” new skills by using the skills you already have, and by raising the correct element for the skill you want (which is somewhat explained in the in-game Help, but not very well.)

The dungeons are short and simple, which helps to move the story along at a good pace.

There is a second ending but the in-game directions make it hard to figure out how to unlock it (hint: if you can’t “attack,” then you must “defend.”)