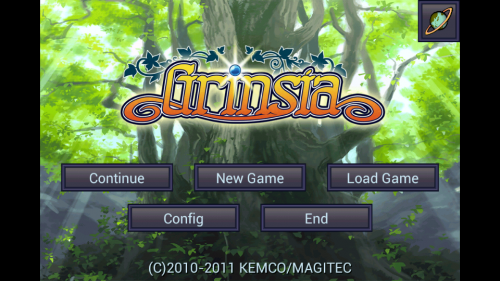 In addition to the online version you can download the full guide here in .pdf format. Download Grinsia Guide

There are 3 reviews for 'Grinsia'.

First off, I played the 3DS port, which is why the controls got a 5/5. It’s hard to screw up basic RPG controls when you’re playing on an actual system and not dealing with touch-screen controls like I do regularly on my tablet.

Now, the best way to describe this game is to simply ask a person to envision a fundamentally sound, but completely generic RPG that does nothing innovative or particularly interesting, but also does everything competently enough that a fan of the genre will likely see it through to the end.

Your party starts out as a party of treasure-hunting adventurers who quickly find themselves at odds with an emperor or overlord or whatever, who also is seeking certain important artifacts. You gain a few more allies, fight his allies and gain those artifacts. There’s a general light-hearted tone to the story, in particular, the interactions between your party members and a decent number of dungeons.

Everything is solid on the surface, but the game has two big problems. First, it is extremely derivative. I remember chuckling over how the final segments felt like Magitec (the Kemco subordinate in charge of producing this one) really liked Dragon Quest II and wanted to make their own version, with how you need to take a cave to get to the land where the final boss resided and how that cave was littered with pits you couldn’t see until you blundered onto one and got sent down a floor. Second, it’s comically easy. You get so many restorative items per battle, you can heal out of any situation and there are full health/magic restoration points at the beginning of dungeons and before boss fights. You also can teleport to and from towns from those points, so if you actually need to get more items for a tough battle, that is simplicity itself.

It’s not bad, but not good. It’s just an average game that exists.