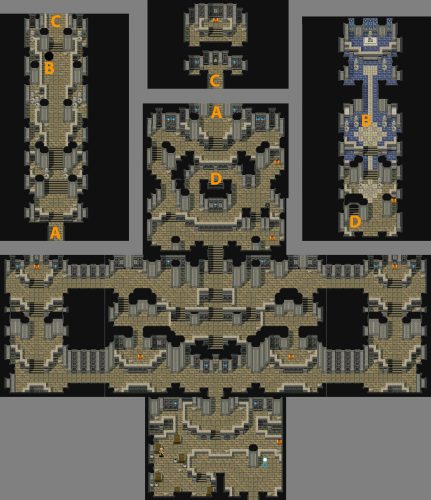 Activate the Porter some steps northeast, you will need it shortly. Then talk to the Guard in the north. He will tell you that you need a Warrant of Passage to get through…

Take the treasure in the east then talk to the old man in the west. Then head back to the Porter and teleport back to Dea Town.

Enter the Inn and talk to the lady in the room in the northwest. She’ll give you the said item. Leave the Inn and teleport back to the Ancient Ruins (you have to scroll down quite a bit to find the destination on the list from the Porter).

Now before you talk to the old man talk with the guard first. After he sees the warrant he lets you pass.

Now go back and talk to the old man and when prompted give him back his warrant of passage. He will give you a Crystal of Life in return.

Pass the guard to get to the next screen.

Go west to the next screen. Go north and collect the treasure at the end. Then head east to get to main screen again.

Go back and on to the next screen in the east. Take the treasure there and go back west to the main screen once again.

After the conversation follow the others and jump down the hole.

Go north to the next screen for another conversation and a new quest. Then go back south to the screen you were before and collect the treasure in the southeast before you go up the stairs.

Collect the last treasure here, then activate the switch to open the before closed door.

Go all the way back to the Porter and teleport to Dea Town. Buy some new equipment and items if you want, then leave the town.

Walk on the path southeast across the bridge, then follow the shoreline southwest till you reach a temple-like building and enter it.