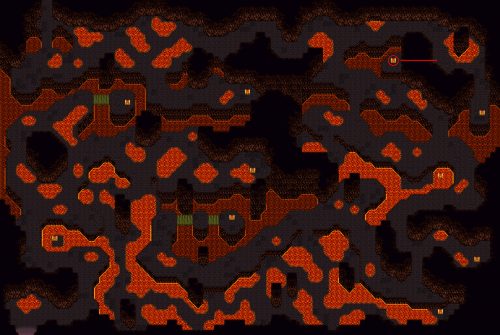 Note: Using Safe Pain or Safety Boots is mandatory to clear this dungeon without major harm to your party.

Western part of the cave

Follow the path till it opens up to a huge area. At this point walk north and around while hugging the edge on the left till you reach the treasure on the little island.

Go back over the bridge then head south and then east as soon as you can. Keep heading east till you reach the next treasure.

Walk back west and take the ramp down to the lower level. Keep to the west as you walk south and enter the lava covered blind alley to the west for another treasure.

Go back out, then walk south again till you hit the wall, then like a mile to the east you will find the next treasure.

Eastern part of the cave

Northwest of here is a ramp that leads to the upper level again. Take it and walk west and around to a treasure. Backtrack to the ramp and follow the path southeast.

At the intersection, go east first to get a treasure, then follow the path north till it opens up to a wide area again. Take the path leading west, and take the ramp down to the lower level. Walk east over the lava to another treasure.

Now go back up the ramp and north over the narrow path. Keep walking north till you hit the north wall.  Then go east and south to get to the treasure on a peninsula. There’s a hidden path through the rocks directly east of the seemingly unreachable treasure a bit to the north.

Then head all the way west along the north wall till the path opens up again. Go south and then east to collect the last treasure in this dungeon.

Go back west and then head for the exit in the northwest corner. Activate the Porter and heal your party. Then interact with the demon standing there to start a boss battle.

Use your newly gained ‘Freeze Blade’ skill if you have Milka in the team. The Dragon is weak against ice apparently. The little wyvern are weak against light, so you can use Holy Light with Elysha on them.

Their ‘Rapid Slice’ attacks can kill a member of your team easily if not at full health, so regular healing is necessary.

Focus on the Dragon first before attacking the wyvern. Use Rapid Slice with your main hero and Heavy Crush with Grieg to kill him with ease. Steal the ‘Crystal of Blessing’ from the Flame Dragon.

After the battle, go south one screen (don't Port back to town!), and you will overhear a conversation between the Emperor, Lauren and Asty. They forge a plan to steal the 5 treasures you collected so far from you.

You are now ready to visit the Ruins of Darkness.

(The reason you visit this location just now and not earlier is because you need the five treasures you have now, in order to be able to fully explore the dungeon.)

Bring the Mithril Ore you found in the cave to the weapon smith in Harva Town. You will be able to buy best armors and weapons for now so make sure you get them.

Now is also a good time to finish the Lemming Hero Side Quest since your team is now strong enough to beat him without greater problems.

Prepare your party then head for the Ruins of Darkness in the north of the world map.