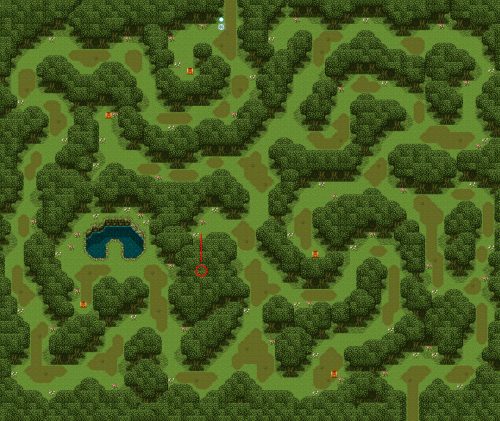 This is the first dungeon that can be a bit confusing (no pun intended). 😛

Follow the path and go west on the first intersection. Walk north and go west again after a short walk. Keep going west, and ignore the path leading north for now.

Follow the western path go get the first treasure here. Head back to the intersection and walk north now, but go northwest as soon as you reach the next intersection.

Follow the path, then go south a bit and keep heading west as far as you can to get to the next treasure.

From the treasure go back to the intersection, then south, but west again after a short distance.

It looks like a dead end, but if you walk south into the woods from the dead end you will find a very well hidden treasure. You can’t see the chest; just hit the button when you can’t go any further into the woods.

Back at the intersection, go west and follow the path all the way north and east to the Porter. Activate it and collect the last treasure in this dungeon southwest of the Porter.

Heal you party members before you go north to the next screen because you are about to fight the first boss battle of the game.

It doesn’t need a real strategy; just kill Asty first with everything you’ve got.

Then kill the Familiars.

Make sure to steal the Spirit Crystal with Milka before you kill Asty. (You may need some tries to be able to steal the item from her though.)

After the battle you will be automatically transported to the Mave Shrine.

Elysha joins your team and your next destination is the Port Town of Nex which you can reach by ship from where the game started – Dea Town.

If you want you can buy a better armor for Elysha before you board the ship. You also want to equip the Treasure of Light to one of your characters if you haven’t done so already.