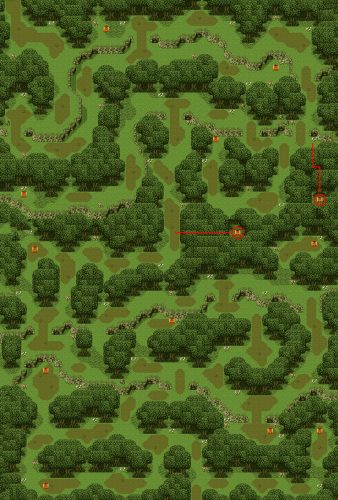 Walk east right away to get the first treasure.

Head back and all the way to the southwest corner of the map for the second treasure.

Go north from there till you reach another treasure.

From the intersection in the south, go east, and then north at the next intersection. Follow the path and turn west for a treasure.

Now, from the intersection, take the southeast path and follow it to the northeast corner of this screen (collecting the treasure in the south on the way).

Before you go on to the next screen, walk east into the forest to get to another hidden treasure. (check the map for details)

Walk north and take the path leading west to get a treasure.

Then take the path to the east. At the next intersection, go south for another treasure. Before you walk north from the intersection, walk south in to the woods to reach another hidden treasure (check the map for details).

Follow the path and collect the treasure west of the next intersection.

Go south and east again, you will find yet another treasure at a dead end. Follow the rest of the path east till you reach the exit in the northwest corner.

Hidden Town and the Eye of Truth

Activate the Porter. The people behave a bit strange, and even the son of the lumberjack can’t put his finger on what’s wrong. Talk with all the people and then leave the town (you can’t do anything right now, anyway).

Talk to the lumberjack again and then teleport to the Shrine of Mave and speak to the Head Shrine Maiden to get the ‘Eye of Truth’.

Enter the ‘Forest of Confusion’ at night and go to the spring. The eye is now powered-up again.

Head back to the hidden town in the Ilyuse Forest and speak to Doria.

With the help of the Eye of Truth, the illusion fades and Doria reveals her true form as a demon which you have to fight now:

Start with accelerate and regenerate from the treasures of light and water.

You also have to deal with confuse which she inflicts regularly. Also her earthquake takes around 50% of your max health so prepare to heal afterwards.

Again, steal the ‘Magic Crystal of Power’ from her before you kill her.

After the battle ends, Hanson will give you the Treasure of Wind. Before you leave, go north to the next screen to get the last treasure in this dungeon.

Leave and head for the next destination on the island covered in sand southwest from Harva Town – The Sandora Tribe Hometown.